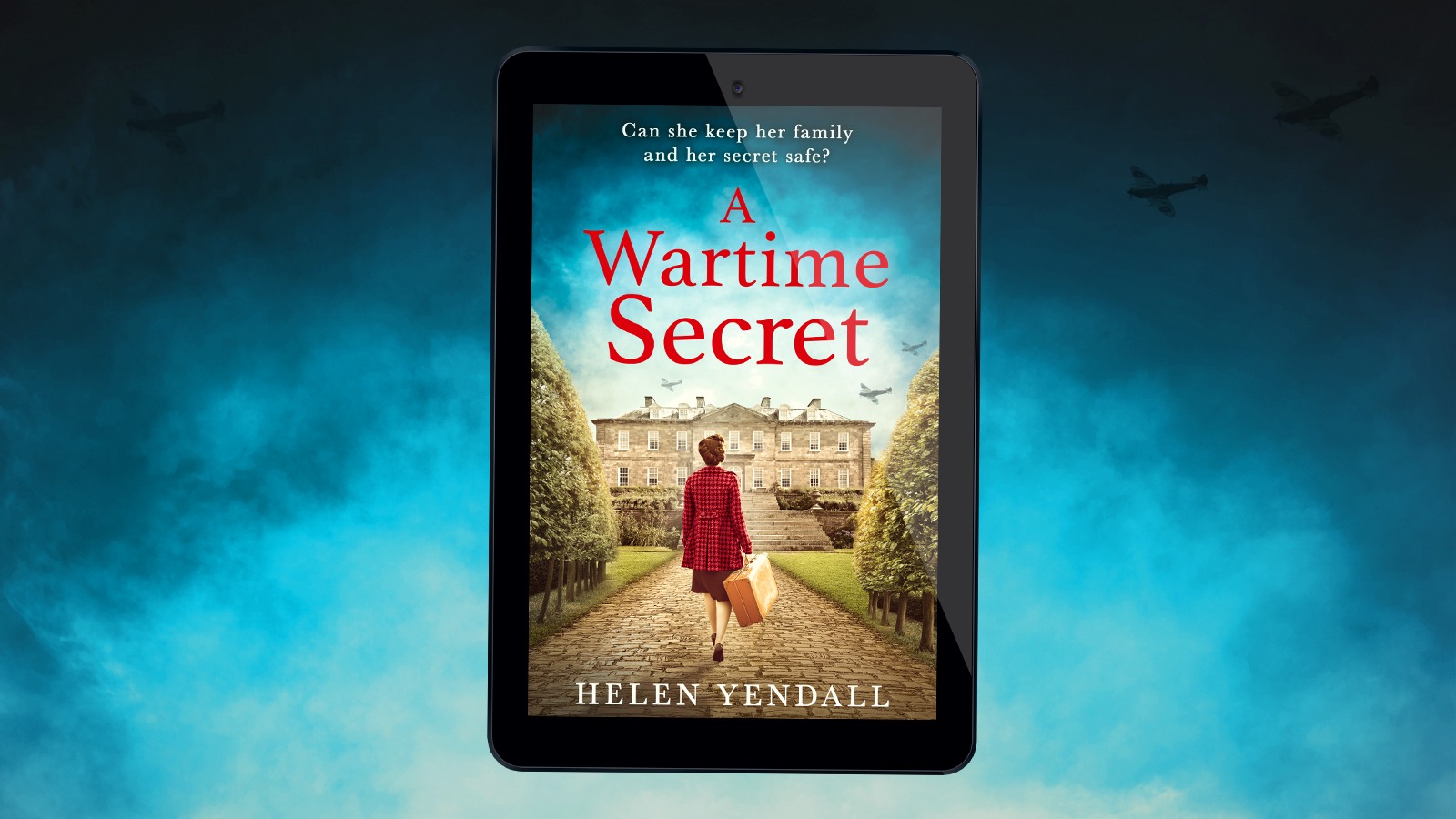 Maggie Corbett lay face down on the open platform of the number 56 bus, the heel of another passenger’s shoe an inch from her nose. It was a man’s black brogue, probably about the same size as her dad’s: a nine or ten. She watched it, ready to jerk her head back if it looked likely to move.

The siren, that awful banshee wail that she’d never get used to, had gone off ten minutes after she’d boarded at Poplar. She shouldn’t have been surprised but, blimey, of all the mornings for it to happen!

It had been standing room only and they’d already been running behind, diverted due to rubble and craters from last night’s raids. If they weren’t all about to be blown to smithereens, she was going to be late on her first day and covered in dirt, into the bargain.

Her clothes must be filthy. She was stretched out, her head in her hands, her face two inches from the grimy, footprint-covered floor. What had been the point of carefully darning her best stockings last night, sponging down her mac and pressing her white blouse? She needn’t have bothered.

Two minutes earlier, she’d flung herself to the floor as the clippie, frantically pressing the bell, had yelled, ‘Oh Gawd! Everyone down! There’s a nasty old man in the sky dropping stones!’ Then the clippie had hitched up her slacks and got down on the floor herself.

The driver had veered to the side of the road and braked heavily, sending people flying.

A gas mask, in its cardboard box, fell onto Maggie’s hand, making her grimace. An elderly woman to one side and a uniformed soldier on the other were struggling to find room to lie down. Maggie tried not to mind too much as she was shoved and prodded by elbows and knees.

‘Sorry, Miss,’ the soldier muttered. Honestly, at any other time, it would be a right rum deal to have a strange man lie down next to you, close enough to smell his ciggie-breath, but these days it seemed almost normal.

Maggie’s nose itched. Dust. She turned her head and shifted her weight so she wasn’t facing the soldier (it was too queer, like they were a married couple lying in bed). She quickly pulled her hand in, before it was stamped on from above by a spiked heel.

Finally, everyone was still. The bus stopped rocking. They were motionless, waiting for the worst to happen. Or, God willing, the all-clear. Someone sniffed; a man coughed. No one spoke. It was like some strange child’s game. If she thought of it like that, it wasn’t quite so frightening.

Dad believed that if your time was up, it was up. If that bomb had your name on it, there was ‘nuffink you could do’. It was certainly fate that had brought Maggie here to this moment, lying in a bus, waiting, possibly, to be blown sky high.

If it hadn’t been for that chance meeting with her old teacher from the secretarial college the other day, Maggie wouldn’t be here now.

She’d popped up town to buy a few bits and pieces for Vi to take with her, and as she was leaving Peter Robinson department store, she’d bumped into Mrs Leibervich.

‘What are you doing now, Maggie?’ she’d asked. ‘Have you kept up your shorthand and typing?’

Maggie thought about the cavernous factory that was alternately sweltering and freezing, the infernal noise and the rotten smell of oil that clung to her clothes, skin and hair, no matter how often she washed. The flickering artificial light gave her headaches, and the stuffiness was so bad that sometimes, in her lunchbreak, she gulped the air outside like a fish out of water.

The wages weren’t bad, though. She used to hand over her pay packet to Mutti each week and get some money back, for ‘spends’.

Mrs Leibervich narrowed her eyes. ‘You know, there might be a position for a clever girl like you at a friend’s bank.’
Maggie shook her head. ‘No, really—’

But Mrs Leibervich had placed her warm hand over Maggie’s and glanced around, as though checking no one was listening. ‘This would definitely be essential work. I could put in a word, if you like.’

A week later, the factory was bombed out and Mrs Leibervich got her an interview for the job at the bank.
Today was meant to be her first day.

Maggie’s nostrils were full of the smell of Cherry Blossom shoe polish and sweat. She tried to breathe through her mouth. Usually, down in the shelters, some bright spark wouldn’t be able to resist a joke or a song but here no one spoke, apart from a woman lying a few feet away in the aisle, who tutted and murmured, ‘I’ll be late again. Bloody Germans, pardon my French.’

Maggie bit her lip. Everyone hated the Germans, of course, especially now, since the bombing had started. There was an absolute rage against them.

‘They ain’t normal, you know,’ the woman continued, to no one in particular. ‘They’re not like us. Oh no. My old mum says they eat babies.’

Maggie had to grit her teeth. She’d heard lots of comments like that recently, but it still made her burn inside. She wanted to stick up for the Germans, but what could she say?

Actually, I know some very nice Germans. They’re not all Nazis. I’m sort of one myself. We’re not all bad! No, she couldn’t say that, she’d be set upon.

A soft breeze blew across the open platform of the bus, carrying an acrid smell of burning. Maggie lifted her head and glimpsed the deserted street, the coils of hosepipes, smoke and ruined buildings.

At any other time, the cool air would be welcome; the bodies next to her were generating an uncomfortable warmth. But Maggie could only think about how exposed they were. Could the enemy bombers see them… from the sky? London buses were such a bright red, they might as well have a target painted on them.

The old woman next to her must have been thinking the same; she suddenly started to shake and whimper. Maggie reached out to stroke her hand. She was as small and frail as a tiny bird.

‘Shhh, love,’ Maggie said, trying to sound perky, though her teeth were chattering. ‘It’ll all be all right.’

If she survived this, the prospect of what lay ahead at Rosman’s was making Maggie’s stomach twist. When she finally arrived, the typewriters would fall silent. The other girls would watch from their desks and listen to the inevitable dressing down she’d get from the supervisor, Miss Sharp. Maggie would turn scarlet, with all those hostile eyes on her. She’d have to put her hand up to her cheek, to cool her face down.

‘You’ll grow out of it, Liebchen,’ Mutti used to tell her, with a reassuring smile. But she hadn’t. Maggie was eighteen now – eighteen! – and she still blushed at the slightest thing.

Miss Sharp had interviewed Maggie only last week. She was poker-thin and angular, like her name, and she hadn’t smiled once. Miss Sharp didn’t seem the sympathetic type. Maggie had passed the shorthand and typing tests, but the older woman had seemed doubtful, pursing her lips and peering at Maggie over tortoiseshell spectacles as Maggie assured her that yes, the journey from Poplar was perfectly manageable. She’d have said anything to get that job, to be a business girl at last!

She’d left the interview feeling quite down, convinced she hadn’t come up to scratch. So, it had been a surprise when the letter came, confirming her position at the bank. Even Dad, who was never impressed by anything, had nodded his head in something like a ‘Well done’ when she’d shown him the letter.

For once, it had seemed things were going her way. Mutti – when Maggie finally got the chance to tell her the good news – would be so proud.

But now, doubtful Miss Sharp was about to be proved right: the journey from home to the bank wasn’t manageable, after all.

Maggie couldn’t bear the thought of being late. She’d been told to arrive punctually. Could they sack her before she’d even started? Dad would go barmy. And, on top of everything, she’d be letting dear Mrs Leibervich down.

Oh, thank God! The warbling all-clear was sounding. There was a collective sigh on the bus and the tension lifted.

Other passengers around Maggie started to shuffle, moving their limbs and struggling to their feet. There were bangs and thuds on the ceiling, as people in the upper deck did the same.

The clippie waited, her finger poised on the bell, while everyone got up, dusted themselves down and retrieved their gas masks and bags. Maggie helped the old woman into a seat.

The bell sounded. ‘Off we go, fella!’ the clippie called to the driver, wiping dust from her trousers.

A Wartime Secret is out now! Available here.