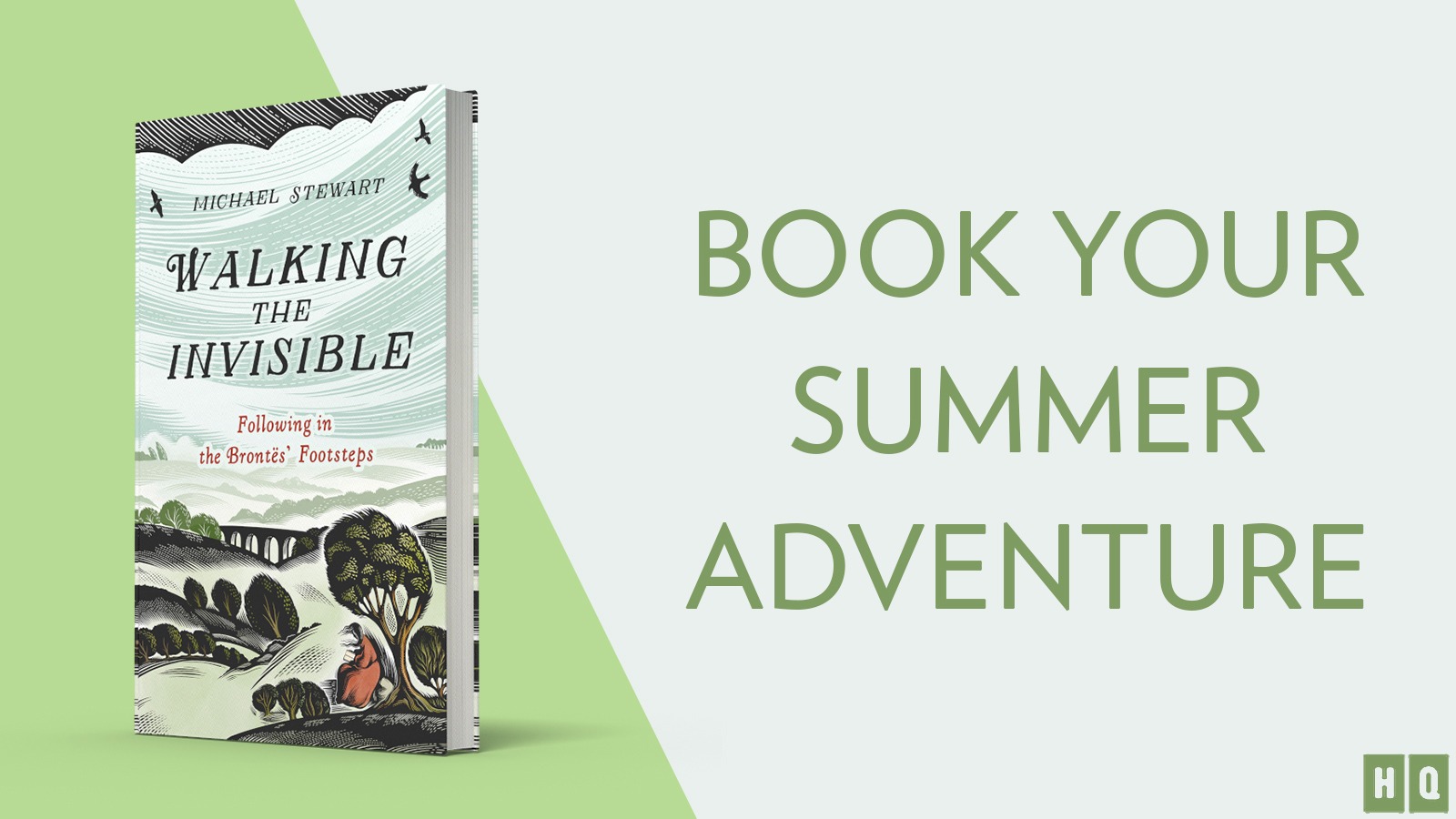 Summer may be slowly coming to an end, but that doesn’t mean we can’t get out and about on a summer adventure! Today on the last day of August we are traversing the Yorkshire moors in the footsteps of the Brontës in Michael Stewart’s Walking the Invisible.

I’m thinking about Emily’s boots as I stand outside my van lacing up my all-singing, all-dancing, high-performance Merrell boots, with their bellows tongue to keep debris out, breathable-mesh lining, single-density removable footbed, moulded-nylon arch shank and air-cushion heel absorption.

I decide to start my fifteen-mile hike across the moors that surround Haworth not in Haworth itself but in nearby Oxenhope. I don’t think Emily would have liked modern-day Haworth, with its artisan beers, cake and coffee, vintage clothing, and ‘I Am Heathcliff’ tea towels. It’s not quite fair to call her a misanthrope, but she would have shunned the tourist trail up Main Street to the Parsonage. And she would have been bemused by her literary success and the literary success of Charlotte and Anne. She had no interest in seeing her work published – that was Charlotte’s doing. If we are to find the ghost of Emily today, it won’t be in Haworth.

From Oxenhope station I follow Mill Lane past the overflow car park up to the main road and head straight across into Dark Lane. After the chimney, I take the first right up Jew Lane and fork right to Back Leeming. I then walk past Milton House and up by the side of the dam wall, joining the path around the shore of Leeming Reservoir.

I attempted this walk on the bicentenary of Emily’s birth in July 2018 with a group of walkers who had come from all over the world. I remember standing in the Parsonage Museum gift shop with Audience Development Officer Diane Fare and the hikers, watching the rain punch the windows and bounce off the paving stones like maggots leaping from a pan of hot fat. We could postpone it, I said. Until the weather clears a bit. Diane and I shared a look, a hopeful moment passed between us. But there were angry, dissenting voices. A hue and cry. They had travelled over land and ocean to be here. One woman had come from New Zealand, another America. Spain, Australia, France, Canada. I saw the light in Diane’s eyes die – there’s no getting out of this. It was on their bucket list, and they were going to proceed no matter what the weather. We were kitted up in waterproofs and Gore-Tex boots, but as I looked at the rain again, pelting the panes and exploding like grenades on the stone flags outside, I knew that we’d be soaked through in half an hour.

Are you sure you don’t want to put it off till a better day? They looked like they could kill me for merely suggesting it. I glanced over to Diane again. She was putting on her best let’s-make-the-most-of-it face and zipping up her Lowe Alpine jacket. I raised my eyebrows. Come on, I thought, it’s only a bit of ‘watter’, as they say around here. Now I’m leading the walk for a local walking festival, and it’s raining again, though this time the rain is soft mizzle. At the end of the reservoir, we cross Stony Hill Clough and up to a narrow gate. A decent path leads us straight up the slope of Thornton Moor, the first of five moors we are going to explore. We cross Stubden Conduit before nearing a lone sycamore tree in the ruins of the Hays, where the Book Stones lie. I show the group the small neat letter carving in one corner and tell them about how I’d stood here the year before as the Countryfile camera crew had filmed me and Anita Rani talking about the Emily Stone.

We climb up towards Hambleton Top. A faint path angles up one of the old holloways leading to Deep Arse Delf. There are two significant clefts, labelled Great Clough and Little Clough on modern OS maps, which were originally called Great Arse and Little Arse, and it’s easy to see why: the fleshy folds look like ample buttocks. We pass prominent shelter cairns as we climb Nab Hill. Below us is the Mist Stone, a slab of millstone grit with a poem by Simon Armitage, carved by Pip Hall. It was this stone that gave me the idea for the Brontë Stones project. It’s a fine poem, one of his best, and ideally located here, overlooking Oxenhope and Haworth, although it is often shrouded in the ‘milky breath’ of mist.

There used to be all-night raves up here, Dionysian dances that went on till dawn. As the sun rose, illuminating the windmills at Ovenden Moor, making the blades of the turbines flicker with white light, it was like last orders at the bar, when the landlord switches on the lights and everyone sees how fucked everyone is. I remember watching a farmer with his border collie, standing there one pinking dawn, taking it all in – the repetitive thumping bass, the strobe lights, the Day-Glo sticks, the poi and diabolo jugglers, and the gurning ravers, chewing the inside of their cheeks – scratching his head, wondering what it was all about. Dressed in flat cap, waxed jacket and Hunter wellies, he couldn’t have looked more different from the sweaty and dishevelled semi-naked revellers. These moors have always harboured strange and wild happenings.

Walking the Invisible is available in hardback, eBook and audio here.