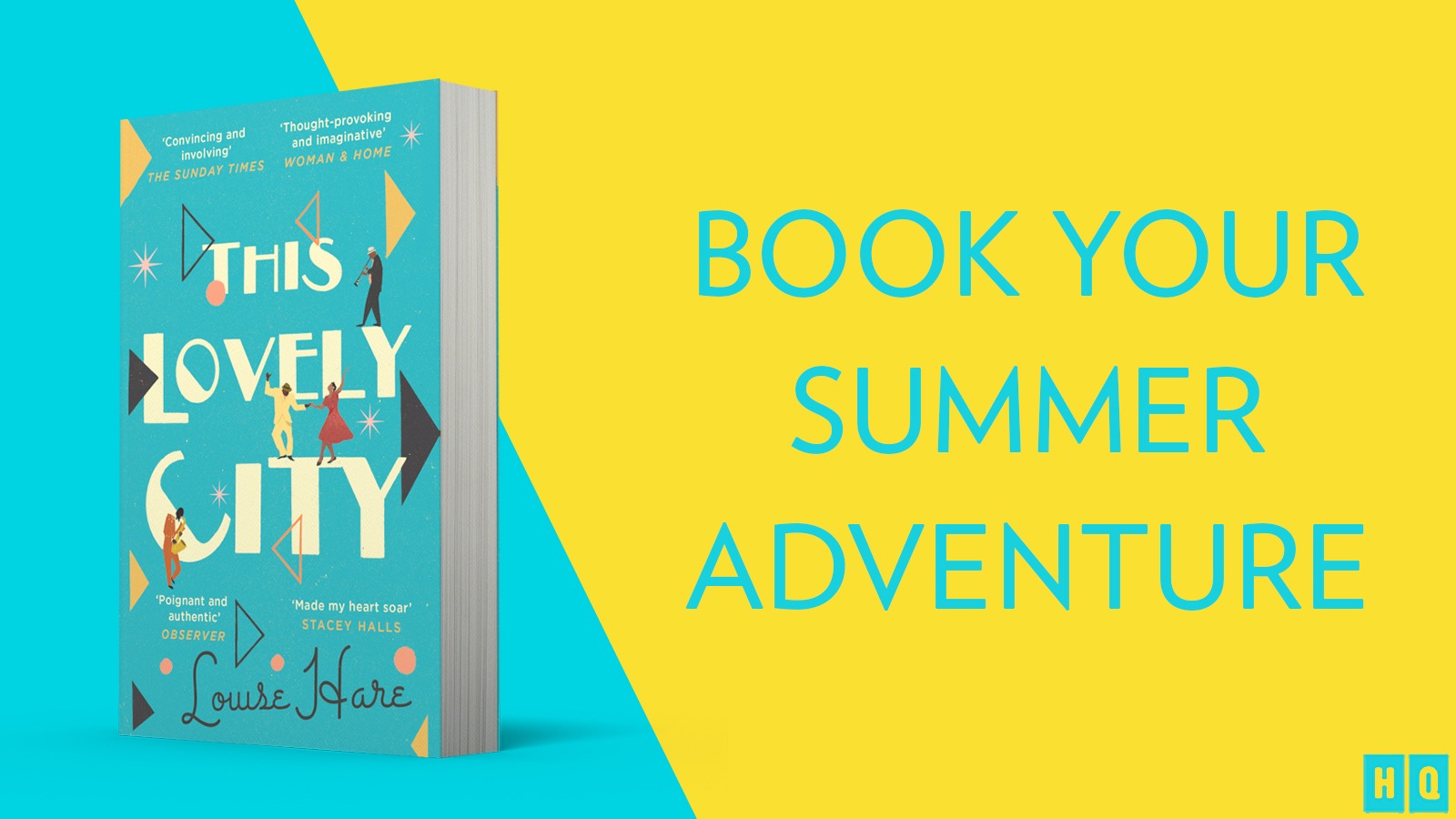 This Monday morning we’re taking a summer adventure back in time to London in the 1950s with Lawrie and Evie in This Lovely City, Louise Hare’s poignant and compelling debut novel! Head to the jazz clubs with us and read the extract below.

The basement club spat Lawrie out into the dirty maze of Soho, a freezing mist settling over him like a damp jacket. He shivered and tightened his grip on the clarinet case in his right hand. He’d best hurry on home before the fog thickened into a ‘pea-souper’, as they called it round here. The hour was later than he’d have liked; the club had been packed and the manager always paid extra if the band stuck around, keeping the crowd drinking.

‘Done for the night?’ The doorman leaned against the wall by the entrance, waiting for the last stragglers to leave.

Lawrie nodded. He’d been invited to stop for a drink with the band after the last set but he had somewhere to be. The night’s moonlighting had been a last-minute call out. He’d already arranged to take Evie out to the pictures but he needed the money and his name was just getting known around town: Mr Reliable. Able to fit in with any band at short notice. Call Lawrie Matthews, he’s your man; he’ll play anything for a shilling or two.

It might be after three in the morning, but the street was still open for trade. Across the road a couple of girls loitered, hardly dressed for the March weather, their legs bare and their jackets open. They sheltered in a shop doorway, huddled together as they smoked. One of them called over to him but he pretended he

hadn’t heard. That sort of entertainment wasn’t for him. A few minutes of pleasure taken in a dark piss-scented alleyway could not outweigh the guilt. This he knew.

Even back home in Jamaica, he’d never felt confident in himself, not like his older brother Bennie, but this city forced him even further inside himself. It was a chronic condition, like asthma or arthritis; he could go a day or so feeling perfectly normal and then just a word or a glance was enough to remind him that he didn’t belong. He liked working the clubs because he could just play his clarinet and get lost in the music. His fellow musicians respected him; many of them even looked like him. He revelled in the applause that came when his name was shouted out and he stepped forward to give his small bow and a smile, just the right side of bashful. But as soon as he left the warmth of the club, things changed. People looked and decided what he was without knowing a single thing about him. Most of them were well-meaning. Somehow that was worse.

He walked swiftly down to Trafalgar Square, putting on a sprint as he saw his night bus approaching, leaping on the back just before it pulled away and clambering up the steps to the upper deck. He sat down, panting slightly through exertion and relief.

Settled, he looked out of the window at the desolate streets rolling by. The city appeared defeated beneath the weak glow of the late winter moon, which lazily cast its light down on the abandoned remnants of buildings that looked flimsy enough to blow over in the backdraught, if only the driver would put his foot down. Almost five years now since VE Day, almost two years since Lawrie had landed at Tilbury, and the city was still too poor to clean itself up. Austerity they called it, as if giving it a name made it more acceptable to those struggling to make ends meet.

The double decker wound its lethargic way south of the river and Lawrie tried to stay awake. His eyes were heavy but the draught through the window kept him shivering enough that he didn’t nod off. He’d be home just in time to change into his uniform and swallow down some breakfast before heading out again to his proper job.

Jumping off at the Town Hall stop in Brixton, the last passenger left on board, he tugged his scarf up over his chin to ward off a wind that felt like icy needles stabbing against his face. By the time he turned the corner of his street his face was already numb and his gloved hand felt stiff around the handle of the clarinet case. He wiggled his fingers and looked down, checking they were still there.

Home at last; a chip of grass green paint flaking away from the swollen wood of the gate as he swung it open, the rough edge catching his glove. He let himself in the front door, careful to close it quietly behind him. Everyone would still be asleep; he could hear Arthur’s less than gentle snores through the thin wood of the door that led to what had been the front room before Mrs Ryan had to let it out for much needed cash. He silently pulled off his shoes and shrugged off his coat, hanging it up by the door, his trilby next to it.

Upstairs in his bedroom he stowed the clarinet safely away at the back of his wardrobe. He trusted his fellow residents well enough, but his mother had always preached that temptation could  befall the best of men. That stick of rosewood had been his father’s before him. Irreplaceable. Maybe one day he would pass it on to a son or daughter himself. He’d dared to mention that dream to Evie only a few weeks ago, and her smile had given him hope.

It was a room that his mother would have been ashamed to offer her cook. Besides the wardrobe there was only space left for a narrow bed and just enough room on the floor for his friend Aston to sleep on when he was in town, which seemed to be less often in recent months. The small window, with a view from the back of the house, let in a little bit of light and a lot of draught. Lawrie had rolled up some newspaper and jammed it into the gap between the window and its frame, but that wasn’t enough to stop the inside of the glass from frosting over.

His uniform was ready on its hanger, but the cold had stiffened his fingers and it was a slow process; shedding the suit of a professional musician and putting on his everyday postman’s uniform. He blew on his hands, trying to get some warmth into them, but he already knew that only a hot mug of tea would work.

Down in the kitchen, he expertly lit the flame on the stove and stared out of the window as the kettle boiled. He fancied he could see the sky lighten slightly as the hour grew closer to dawn. The kettle began its low whistle, and Lawrie lifted it off the ring before it could wake anybody with a full screech. Mrs Ryan would be up early so he made a full pot, tugging the hand-knitted tea cosy around it so that she could have a hot cuppa as soon as she came down. He always let it sit a good long while. He’d never been a big tea drinker before meeting Mrs Ryan, so he’d become used to the way she brewed it. He kept one eye on the time as he clasped  the mug, his fingers softening, the feeling returning, as he sat at the table and enjoyed the silence and warmth of the kitchen.

This Lovely City is available now in paperback, eBook and audio here.