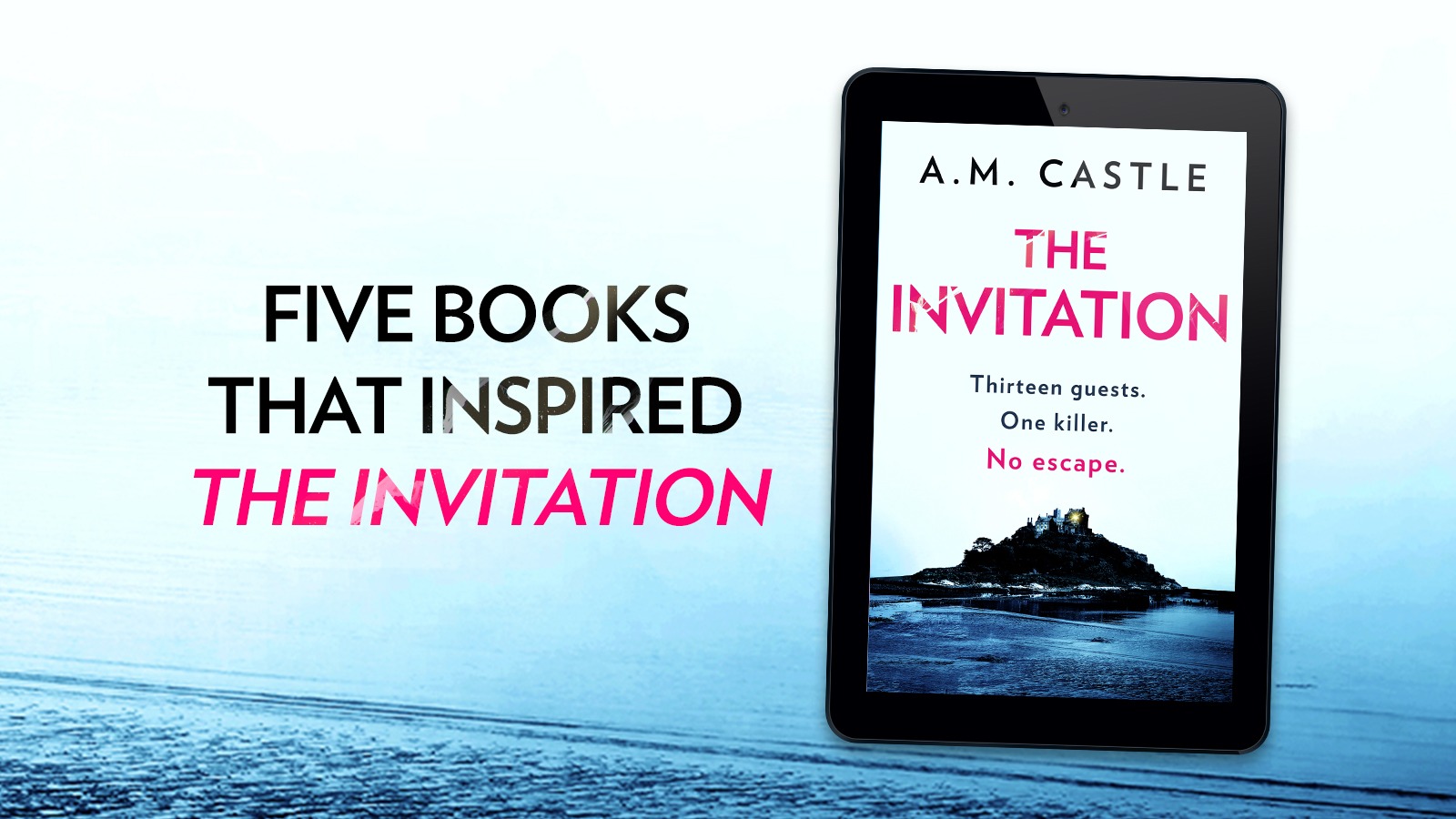 To celebrate the upcoming release The Invitation, author A.M. Castle is here to share the five books that inspired her novel. From atmospheric thrillers to classic murder mysteries, stock up on ideas for your TBR in this blog post.

When I was dreaming up the story for my latest psychological thriller, The Invitation, the UK was in the middle of the first coronavirus lockdown. I was living in Lewisham, in the middle of central London, and I was feeling trapped. As so many of us did. I would have given anything to escape. Every day I would go out for my regulation hour of exercise, treading the same dusty old path, and my mind would wander, to all the places I’d like to be and all the stories I’d like to write.

I kept coming back to the seaside. The tang of a good brisk sea breeze and the sight of waves rolling in on an English beach. I didn’t want to be under a beating sun,I didn’t want palm trees or even cocktails. I just wanted somewhere with wide horizons, giving the sense of possibilities stretching ahead of me into the clouds, a world away from sirens and sickness.

Thinking over my favourite books, I’ve realised how important setting has always been to me. Making the backdrop to these stories real inside my head, has added hugely to my enjoyment of the characters and plot. With The Invitation, I wanted to pull off the same trick: creating a unique setting that would give an extra dimension to the drama and sense of menace already troubling my group of reunited university friends.

Here are the five books that helped me the most. They are all brilliant reads in themselves. Each one also helped spark my imagination and create Mount Tregowan, home of my wilful heiress Rachel Cadogan:

The first line of Daphne du Maurier’s masterpiece, ‘Last night I dreamt I went to Manderley again,’ sets up this great house as a symbol. But of what? Initially, we may feel the second Mrs de Winter yearns for Manderley and all it represents, gradually we discover that isn’t the case… Both Mrs Danvers and the absent but omnipresent Rebecca are inextricably tied to the house. I wanted to make my own Mount Tregowan as evocative, and simultaneously beguiling and dangerous, as Manderley is.

Who doesn’t love Agatha Christie’s great classic whodunit? As well as being a cracking story it is a prime example of a ‘closed circle’ story, which then narrows into a locked room mystery. When the train in Murder on the Orient Express hits a snowbank outside Stamboul, and becomes inextricably stuck in a hostile landscape, the situation becomes all the more tense and claustrophobic. In The Invitation, my thirteen characters become trapped at Castle Tregowan by a raging tempest. I really enjoyed trying to make the puzzle as fiendish as possible, but the clues are all there, so you can solve the mystery or go along for a stormy ride.

3. The Lighthouse by PD James

I’m a big fan of the late PD James’s books and I once had the good fortune to interview her for a newspaper. She told me her interest in whodunits really started when she heard the nursery rhyme Humpty Dumpty at the age of three or four  – and immediately wondered whether Humpty had been pushed. That suspicious mindset is certainly deployed in The Lighthouse, one of her Adam Dalgliesh mysteries. It is set on a wild and remote Cornish island. Cornwall has such a rugged coast, and, as in The Invitation, it is more than possible to imagine that the sea itself is the enemy of the characters as the story unfolds.

So much has been written about this wonderful novel. However, the theme that interested me when I was writing The Invitation was clash of new money with old. I wanted Rachel Tregowan, my fabulous heiress, to have something of the gilded, flawed charm of Daisy Buchanan, representing the bulletproof arrogance of old money. But I also wanted her to throw the sort of glitzy parties that would have given even Jay Gatsby, who was all about flaunting his self-made fortune, a serious case of FOMO.

5. Death on the Nile by Agatha Christie

In this brilliantly choreographed murder mystery, the Nile is quite a benign presence, unlike the sea roaring around Mount Tregown in The Invitation. Yet Christie still makes sure the river plays a very important part in her well-oiled plot. In my own story, I have also used the sea to cover up a few mysteries, hopefully keeping the tension high until the last few pages.

I really hope you enjoy reading The Invitation, and I hope this list of the books that inspired me might encourage you to read – or re-read – some other wonderful stories too. There is nothing like a book that fires the imagination to get you through dark days.

The Invitation, the new gripping pyschological thriller, is out March 26th. Pre-order your copy here.