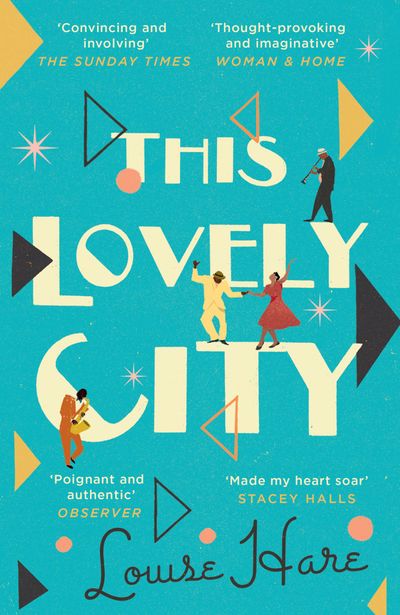 *As seen on the new BBC TWO TV book club, Between the Covers*

Indie Book of the Month for March, selected by the Booksellers Association

‘Full of life and love . . . it made my heart soar, and should be on every Londoner’s shelf’ Stacey Halls, Sunday Times bestselling author of The Familiars

‘The writing is wonderful; London’s energy runs right through it; the characters leap off the page. I was truly sad to leave them behind’ Adam Kay, Observer

* * *
The drinks are flowing.
The music is playing.
But the party can’t last.

With the Blitz over and London reeling from war, jazz musician Lawrie Matthews has answered England’s call for help. Fresh off the Empire Windrush, he’s taken a tiny room in south London lodgings, and has fallen in love with the girl next door. Lawrie has poured his heart into his new home – and it’s alive with possibility. Until, one morning, he makes a terrible discovery.

As the local community rallies, fingers of blame are pointed at those who had recently been welcomed with open arms. And, before long, the newest arrivals become the prime suspects in a tragedy which threatens to tear the city apart.

Atmospheric, poignant and compelling, Louise Hare’s debut shows that new arrivals have always been the prime suspects. But, also, that there is always hope.
* * *

MORE PRAISE FOR THIS LOVELY CITY:

‘Full to the brim with such complete joys and heart-aching tragedies . . . you can feel the warmth and colour emanating from the pages’ Magic Radio Book Club

Author: Louise Hare
Format: eBook
Release Date: 12/03/2020
ISBN: 978-0-00-833258-7
Louise Hare is a London-based writer and has an MA in Creative Writing from Birkbeck, University of London. Originally from Warrington, the capital is the inspiration for much of her work, including This Lovely City, which began life after a trip into the deep level shelter below Clapham Common.This Lovely City was featured on the inaugural BBC TWO TV book club show, Between the Covers, and has received multiple accolades, securing Louise’s place as an author to watch.

*As seen on the new BBC TWO TV book club, Between the Covers*

Indie Book of the Month for March, selected by the Booksellers Association