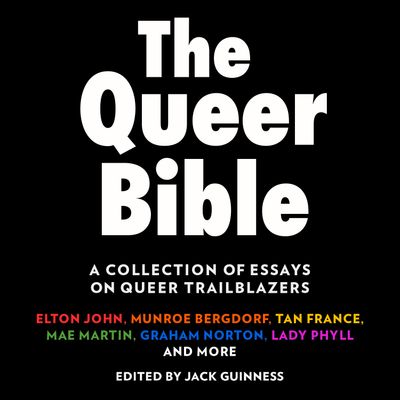 ‘We stand on the shoulders of giants. Now we learn their names.’

THE QUEER BIBLE is a collection of essays written by queer icons, about the queer trailblazers throughout history who inspired them.

Based on the popular website QueerBible.com, founded by model and activist Jack Guinness, this timely collection, edited by him, continues his mission – to create a space dedicated to the celebration of queer history.

The Queer Bible is a love letter to the LGBTQI+ community and its allies.

Author: Edited by Jack Guinness, Read by Jack Guinness and Full Cast
Format: Audio-Book
Release Date: 17/06/2021
ISBN: 978-0-00-834400-9
Detailed Edition: Unabridged edition
Jack Guinness began his career as a model, starring in global campaigns for brands such as L’Oréal, Dunhill and Hugo Boss. As a writer, style and fashion commentator, he has contributed to the Sunday Times Style magazine, the Guardian, British GQ, Gentleman’s Journal and Tatler.

‘We stand on the shoulders of giants. Now we learn their names.’