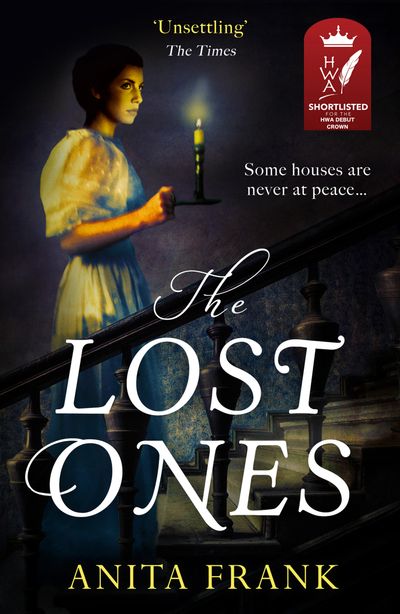 Reeling from the death of her fiancé, Stella Marcham welcomes the opportunity to stay with her pregnant sister, Madeleine, at her imposing country mansion, Greyswick – but she arrives to discover a house of unease and her sister gripped by fear and suspicion.

Before long, strange incidents begin to trouble Stella – sobbing in the night, little footsteps on the stairs – and as events escalate, she finds herself drawn to the tragic history of the house.

Aided by a wounded war veteran, Stella sets about uncovering Greyswick’s dark and terrible secrets – secrets the dead whisper from the other side…

In the classic tradition of The Woman in Black, Anita Frank weaves a spellbinding debut of family tragedy, loss and redemption.

Praise for The Lost Ones:

‘Supernatural and historical intertwine in Anita Frank’s unsettling first novel … reminiscent of other tales of the supernatural, but conveys its own frissons and shocks’
Sunday Times

‘A spine-tingling debut from Anita Frank is part ghost story, part murder mystery, and the perfect chilling read as the nights turn colder and longer’ OK!

‘I loved it SO MUCH – so creepy and compelling, full of atmosphere and gave me goosebumps…’ Lisa Hall

‘If you liked The Woman in Black, you’ll love this utterly gripping and atmospheric book’ Woman & Home

‘For fans of Henry James and Susan Hill, this chilling supernatural mystery is written in the classic mould. Intriguing, moving and assured’ Essie Fox

‘I’ve raced to the shocking final twist of this lush, beautifully written historical novel. A gripping ghost story with an achingly poignant family mystery at its heart’ Samantha King