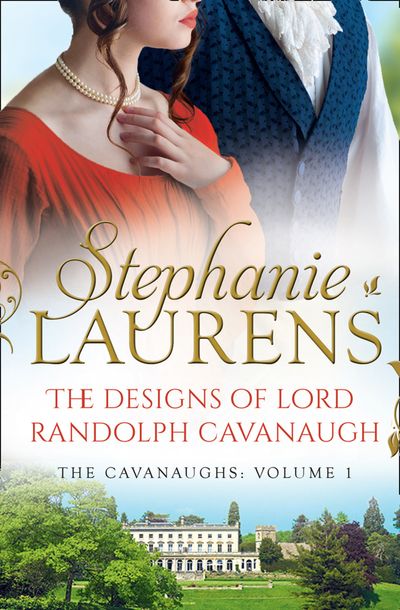 The Designs Of Lord Randolph Cavanaugh

#1 New York Times bestselling author Stephanie Laurens returns with a new series that captures the simmering desires and intrigues of early Victorians as only she can.

Ryder Cavanaugh’s step-siblings are determined to make their own marks in London society. Seeking fortune and passion, THE CAVANAUGHS will delight readers with their bold exploits.

An independent nobleman
Lord Randolph Cavanaugh is loyal and devoted—but only to family. To the rest of the world he’s aloof and untouchable, a respected and driven entrepreneur. But Rand yearns for more in life, and when he travels to Buckinghamshire to review a recent investment, he discovers a passionate woman who will challenge his ruthless self-control…

A determined lady
Felicia Throgmorton intends to keep her family afloat. For decades, her father was consumed by his inventions and now, months after his death, with their finances in ruins, her brother insists on continuing their father’s tinkering. Felicia is desperate to hold together what’s left of the estate. Then she discovers she must help persuade their latest investor that her father’s follies are a risk worth taking…

Together—the perfect team
Rand arrives at Throgmorton Hall to discover the invention on which he’s staked his reputation has exploded, the inventor is not who he expected, and a fiercely intelligent woman now holds the key to his future success. But unflinching courage in the face of dismaying hurdles is a trait they share, and Rand and Felicia are forced to act together against dangerous foes to protect everything they hold dear.

The Designs Of Lord Randolph Cavanaugh

#1 New York Times bestselling author Stephanie Laurens returns with a new series that captures the simmering desires and intrigues of early Victorians as only she can.