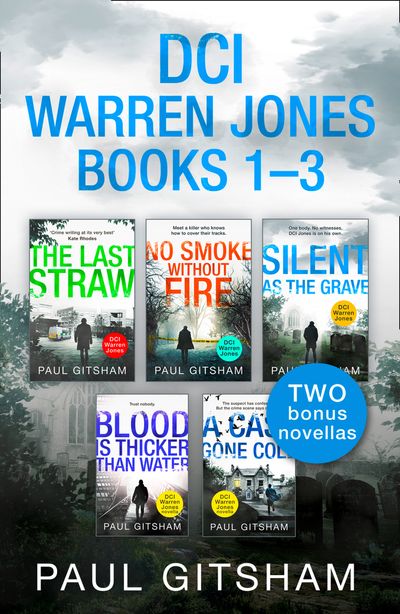 The first three books in the DCI Warren Jones series in one volume – with two bonus novellas!

1 The Last Straw
A professor is found with his throat slashed, and there’s a long list of potential suspects. But for newly appointed Detective Chief Inspector Warren Jones, political pressure means solving the case is far from easy…

2 No Smoke Without Fire
A young woman is found dead, and all the clues match the MO of a previous perpetrator – but he has a cast-iron alibi. As personal tragedy divides Warren’s attention, he must fight to find the killer before another victim is taken.

3 Silent as the Grave
After a dog walker is found dead, a lack of clues leave the police stuck – until an informant offers information that could blow a wide criminal conspiracy wide open. But can Warren trust him?

‘DCI Warren Jones is one of those characters I just can’t get enough of.’ Reader review, 5 Stars

‘The writer continues to produce intriguing plots with unexpected twists which keeps you guessing and wanting more.’ Reader review, 5 Stars

‘DCI Warren Jones and his team are a sure-fire hit.’ Reader review, 5 Stars

‘DCI Warren Jones is a great addition to the genre.’Reader review, 5 Stars

Author: Paul Gitsham
Format: eBook
Release Date: 10/02/2021
ISBN: 978-0-00-844325-2
Paul Gitsham started his career as a biologist working in the UK and Canada. After stints as the world’s most over-qualified receptionist and a spell ensuring that international terrorists hadn’t opened a Child's Savings Account at a major UK bank (a job even duller than working reception) he retrained as a Science Teacher.

The first three books in the DCI Warren Jones series in one volume – with two bonus novellas!