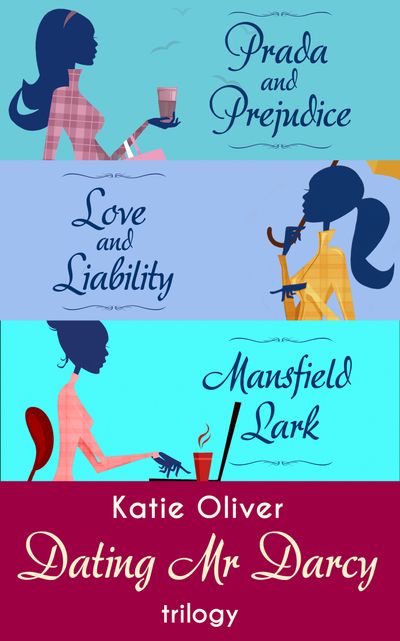 The perfect trilogy for Austen-and-shopping-mad fans! Give in to your love of scandal and Prada in this glamorous collection of the Dating Mr Darcy trilogy!

He’s a man in possession of a large fortune….but is he in want of a wife?!

It is a truth universally acknowledged that Natalie Dashwood loves to shop. After all, as the heiress to the renowned London department store Dashwood & James she’s been wearing designer shoes since she could walk! But a socialite’s life isn’t as perfect as you might imagine… Natalie’s spending is spiraling slightly out of control, her rock star boyfriend is engaged to someone else, and it seems the family business is in financial crisis. New high-flying business exec Rhys Gordon has been brought in to save the company from ruin, but what are his motives? And infuriatingly even a shoe-shopping spree can’t take her mind off his distracting and oh-so-charming smile… Couture and confetti mix with scandal and intrigue in this wonderful tale of retail, romance and redemption.

Holly James is looking for her big break. A young journalist for BritTEEN magazine, she is dying to write about something more meaningful than pop stars and nail varnish. So when she spots a homeless teenager outside the office, she feels compelled to tell her story. But her evil boss Sasha has other ideas…
Holly is sent to interview a city solicitor she has never heard of. But Alex Barrington turns out to be the very opposite of fusty and boring and Holly’s interest struggles to stay strictly professional!
With Sasha sabotaging her every move, and her story about teens on the street leading her into London’s dark underworld, Holly is chasing both love and success at the same time. But happy endings like that only happen in books don’t they…?

Gemma Astley has succeeded where so many others have failed. She has somehow managed to tame tearaway rock star Dominic Heath and stop his womanising ways for good. But just as they find happiness, Dominic’s secret aristocratic past becomes public knowledge, and jeopardises everything.

Dominic is actually Rupert Locksley, heir of Mansfield House, a crumbling stately home that needs major financial investment to save it from ruin.

Dominic’s mother pleads for his help, but his father, the Earl, is on the verge of disinheriting him. Meanwhile Dominic’s new status as Mansfield’s long-lost heir attracts the attention of cut-throat socialite Bibi Matchington-Alcester, who means to make him hers at any cost.

Gemma and Dominic will need to test the strength of their foundations – as well as those of Mansfield House – if either are to remain standing.

The perfect trilogy for Austen-and-shopping-mad fans! Give in to your love of scandal and Prada in this glamorous collection of the Dating Mr Darcy trilogy!