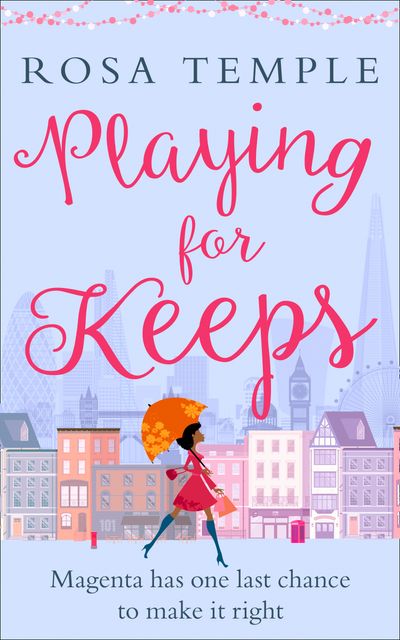 Having papered over the cracks in her relationship with artist boyfriend Anthony, Magenta Bright is fully focused on opening her first shop on the King’s Road – and on coaching her best friend – vodka-swilling, catty supermodel Anya – through her unexpected pregnancy.

But with Anthony away in Italy on a lucrative commission, the distance between them is more than metaphoric. And then Magenta’s ex, Hugo, shows up, the man she once lost her heart to. At one time there was nothing more important to Magenta than fashion and fun, and throwing herself into every drama that passes her way. But now Magenta’s world is rocked by questions of life and death, and how she would cope if the people closest to her were gone for good.

At work, she can’t seem to put a foot wrong, but in her personal life she’s her own worst enemy. And the stakes have never been higher…

“I loved these characters”

Author: Rosa Temple
Format: eBook
Release Date: 12/02/2018
ISBN: 978-0-00-826058-3
Rosa Temple began writing romantic comedy and chick lit novellas, short stories and books because of her passion for what she calls the 'early chick lit films', like: Sabrina, Barefoot In the Park and Breakfast at Tiffany's. She honed her skills as a ghostwriter, gaining experience writing romance novellas and book series, with sweet themes as well as steamy novels for adult readers.She now specialises in contemporary romance but prefers to write chick-lit and romantic comedies.So far, Rosa has published romantic comedy novella, Sleeping With Your Best Friend and the full length novel, Natalie's Getting Married, is published on 14th March 2016.Rosa Temple is a Londoner and is married with two sons. She reads a wide range of Women’s Fiction and all its sub genres. She is a reluctant keep fit fanatic and doer of housework and insists that writing keeps her away from such strenuous tasks. She spends her days creating characters and storylines while drinking herbal tea and eating chocolate biscuits.