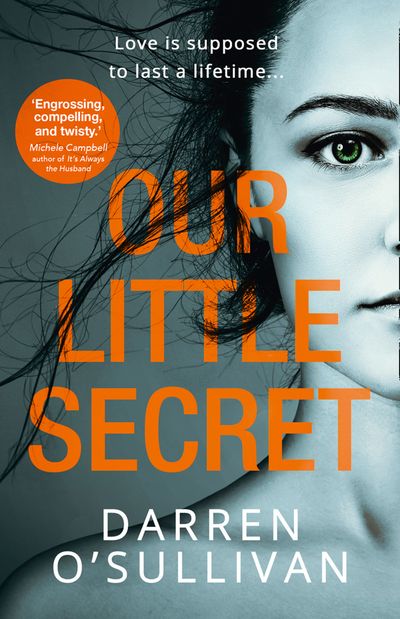 ‘Engrossing, compelling and twisty from the first page to the shocking ending. This book grabbed me and didn’t let go.’ Michele Campbell, author of It’s Always the Husband

‘Unique and utterly compelling. This twisty psychological thriller will chill you to the bones.’ Gemma Metcalfe, author of Trust Me

‘A stellar and original concept, brilliantly executed. The final chapters had my heart in my throat! O’Sullivan is certainly one to watch.’ Phoebe Morgan, author of The Doll House

A deserted train station: A man waits. A woman watches.

Chris is ready to join his wife. He’s planned this moment for nearly a year. The date. The time. The train. But he hadn’t factored in Sarah.

So when Sarah walks on to the platform and sees a man swaying at the edge she assumes he’s just had too much to drink. What she doesn’t expect is to stop a suicide.

But there are some secrets that are meant to stay buried…

Praise for Our Little Secret

’Darren O’Sullivan keeps the reader on the edge of their seat in this dark, clever look at what drives people to the edge and how quickly a life can change.’ Phoebe Morgan author of The Doll House

‘This is one of the best books I have ever read. It was nail-biting and had me on edge from start to finish… a must buy!’ Greta Halliday

‘One of the best books of its genre.’ Julia Beales

‘The only thing unbelievable about this thriller is that it’s the authors debut.’ Jennifer Kelly

‘Gripping from the moment you start reading it.’ Emily Charlton

‘One of the best novels I’ve read in a long time.’ Paul Lane

Author: Darren O’Sullivan
Format: Paperback
Release Date: 05/04/2018
Pages: 368
ISBN: 978-0-00-828516-6
Darren O'Sullivan was born in Slough in 1982 but moved to Peterborough when he was 17 to train in performing arts. He has been working creatively ever since, first as an actor for the stage, then director. 5 years ago he felt inspired to write theatre and from that came the idea to develop a novel.Following being accepted in the Faber and Faber novel writing programme in 2015 he fine tuned his hand and during that 6 month training programme 'Our Little Secret' was born.Darren signed for HQ with his psychological thriller 'Our Little Secret'.He is currently working on his second thriller.

‘Engrossing, compelling and twisty from the first page to the shocking ending. This book grabbed me and didn't let go.’ Michele Campbell, author of It’s Always the Husband