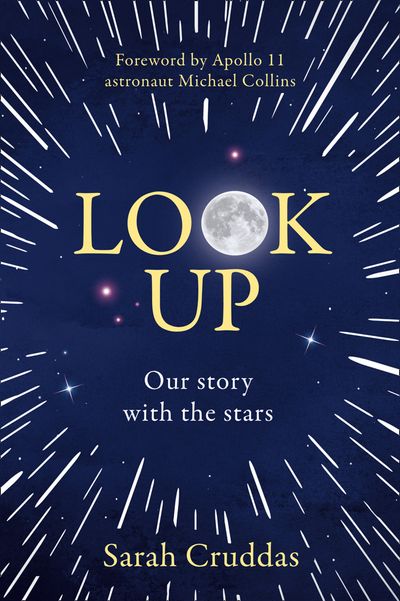 Look Up: Our story with the stars

‘Sarah Cruddas is a gifted writer and Look Up is an inspired book. I am hopeful that we will never stop looking up.’ Apollo 11 astronaut Michael Collins

Most of us have never been to space. To date, of the more than 100 billion humans that have ever existed, fewer than 600 humans have ever left Earth. But the exploration of space is the most significant thing we will ever do as a species.

Sarah Cruddas has been looking to the skies her entire life. Her childhood was spent staring at the Moon and hearing stories of the space race, and she worked in a fruit factory to fund her love of the subject. Her subsequent career studying astrophysics, and becoming a television host and space journalist has seen her report on space exploration and chase launches across the world. In Look Up Sarah explains why she has always been a passionate advocate for why space should matter – to everyone.

From our ancestors who first painted patterns of the stars in caves, to the US and Soviet pioneers who first forged a path beyond our planet, Sarah Cruddas explores the stories and sacrifices that humankind has made to understand more about our place in the universe. And even today, when Moon walking and people in space suits seem less relevant to us than climate change and conflicts here on Earth, she shows how everything from medicine to mobile phones is affected by space technology, and how a new generation of entrepreneurs have kick-started a new story with the stars.

This is an inspirational and enlightening introduction to the importance of space to everyone, and why we should all learn to Look Up.

Author: Sarah Cruddas, Foreword by Michael Collins
Format: Hardback
Release Date: 17/09/2020
Pages: 256
ISBN: 978-0-00-835827-3
Sarah Cruddas is a Space Journalist, TV host and award winning author. She has an academic background in astrophysics and is a global thought leader in the growing commercial space sector. Sarah is a director at Space for Humanity a US non-profit aimed at democratizing access to space, and a host of the television series Contact on Discovery and Science Channel.She is a regular face on Sky, BBC, Good Morning Britain, ITV news, Channel 5 News, Channel 4 News and BBC News. She has appeared on various shows include Coast, Sunday Morning Live, Derren Brown, and various Discovery and Science Channel documentaries.Sarah has presented shows about space on BBC Radio 4, and is a regular across BBC radio. She has also been involved in movies working on two documentaries Last Man on the Moon (2014) and Mission Control: The Unsung Heroes of Apollo (2017).

Look Up: Our story with the stars

‘Sarah Cruddas is a gifted writer and Look Up is an inspired book. I am hopeful that we will never stop looking up.’ Apollo 11 astronaut Michael Collins