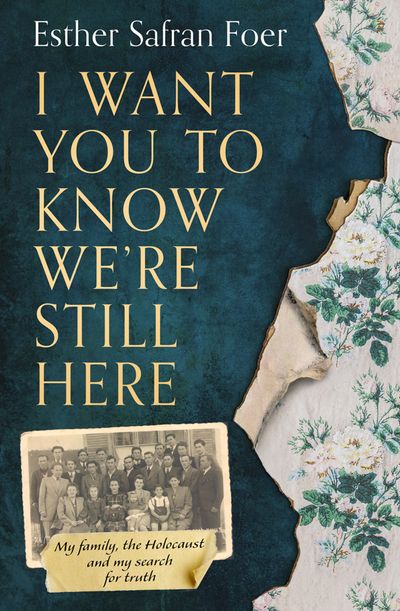 I Want You to Know We’re Still Here: My family, the Holocaust and my search for truth

A BBC RADIO 4 BOOK OF THE WEEK

‘Esther Safran Foer has written of her family in a way that is both uniquely and heartbreakingly her story and a deeply important testament for Ashkenazi Jews. Her memories are our important history.’ Robert Peston, ITV Political Editor

A moving and powerful inter-generational memoir about story and memory.

Mine is a family of readers and writers. Our house is filled with books. There are contemporary design books on the coffee table in the living room, legal books in my husband’s home office, and piles of children’s books for when my grandchildren visit. However, the side table next to my bed is piled with books about the Holocaust. Framed maps of shtetls line my office walls and pictures of relatives killed in the Holocaust are displayed on our family gallery walls.

Sometimes I feel like I exist across two polarized realities, experiencing great fulfillment from family, friends, and a meaningful career, and, at the same time, finding the joy of my life tempered by its shadows. In the darker corners of my mind live ghosts and demons who visit me from the shtetls in Ukraine where my family came from. Some of the details that make these visions so vivid are imagined because I grew up in a family where memories were too terrible to speak of.

This is the true story of four generations who have been dealing with the Holocaust and its aftermath. We are four generations, survivors and survivors of survivors, storytellers and memory keepers. And we’re still here.

Author: Esther Safran Foer
Format: Hardback
Release Date: 16/04/2020
Pages: 384
ISBN: 978-0-00-829762-6
Esther Safran Foer is one of the most well-known and influential women in Washington, D.C. Most recently she served as the executive director of the Sixth & I historic synagogue for nearly 10 years, revitalizing the cultural relevance of the historic building. Before taking over at Sixth & I, she was the president of FM Strategic Communications, a public relations firm that advised top law firms and Fortune 500 companies. Her first job in politics was on the staff of the George McGovern campaign for president in 1972.

I Want You to Know We’re Still Here: My family, the Holocaust and my search for truth

A BBC RADIO 4 BOOK OF THE WEEK

‘Esther Safran Foer has written of her family in a way that is both uniquely and heartbreakingly her story and a deeply important testament for Ashkenazi Jews. Her memories are our important history.’ Robert Peston, ITV Political Editor