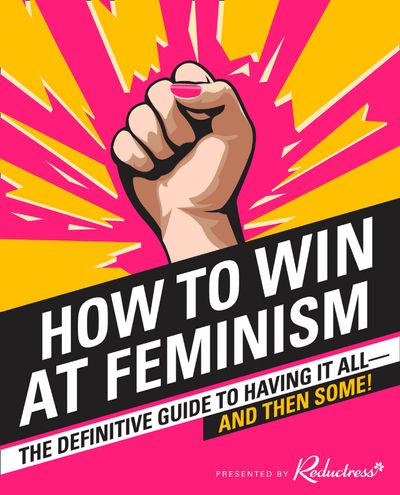 How to Win at Feminism: The Definitive Guide to Having It All… And Then Some!

The definitive manual on how to be the best feminist you can be—as told by a hilariously misguided yet well-meaning women’s magazine. From the creators of the wildly popular satirical website, Reductress.

From hot feminist sex to a trendy feminist up-do, the bold and brilliant minds behind Reductress reveal the secrets to being super progressive—and cool, hip, and pretty. Feminism today means demanding gender equality—and a fabulous manicure. After all, we’re not wearing girdles and cleaning the house anymore. We’re wearing Spanx and hiring a cleaning lady. That’s feminism!

How to Win at Feminism defines what’s feminist and what isn’t, shows you how to take up space (but not too much space), identifies which clothes and products to be offended by, and offers funny insight, knowledge, tips, and advice every fourth-wave feminist needs, including:

With this ultimate guide—complete with four-color illustrations—you can femsplain feminism to basic friends, and learn how to battle the patriarchy while maintaining a dependable moisturizing routine. We may have come a long way, baby, but we have a long way to go. How to Win at Feminism is the road map to get there!

’Reductress has discovered a rich, deep seam of comedy.’
-Graham Linehan, creator of Father Ted, Black Books and The IT Crowd

Author: Reductress
Format: eBook
Release Date: 25/10/2016
ISBN: 978-0-00-821429-6
From Reductress.com: The first and only satirical women’s magazine, Reductress was founded in 2013 by Beth Newell and Sarah Pappalardo. The mission of Reductress is to take on the outdated perspectives and condescending tone of popular women’s media, through the eyes of the funniest women in comedy today. Also, we want people to think we’re pretty.

How to Win at Feminism: The Definitive Guide to Having It All... And Then Some!

The definitive manual on how to be the best feminist you can be—as told by a hilariously misguided yet well-meaning women’s magazine. From the creators of the wildly popular satirical website, Reductress.