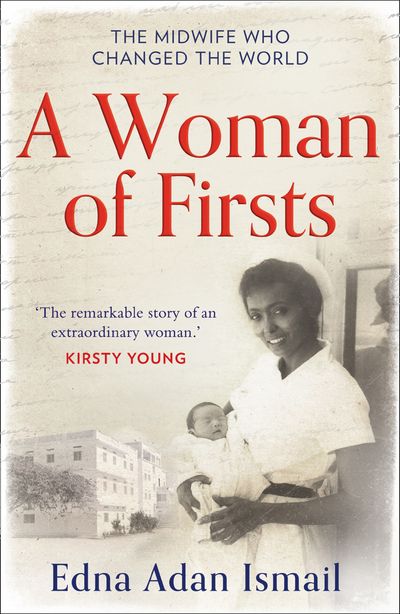 A Woman of Firsts: The midwife who built a hospital and changed the world

Edna Adan Ismail endured it all – for the women of Africa.

A Woman of Firsts tells the inspirational story of a remarkable daughter, nurse and First Lady. The indomitable Edna Adan Ismail survived imprisonment, persecution, and civil war to become a pioneering politician, a leading light in the World Health Organisation, and a global campaigner for women’s rights.

The eldest child of an overworked doctor in the British Protectorate of Somaliland, Edna was the first midwife in Somaliland, she campaigned tirelessly for better healthcare for women and fought for women on a global stage as the first female Foreign Minister of her country. But mixing with presidents and princes, she still never forgot her roots and continued to deliver children and train midwives – a role she has to this day.

At 81 years old, she still runs what is hailed as the Horn of Africa’s finest university hospital where she trains future generations and still delivers babies.

After all – as she puts it – she is simply a midwife.

Author: Edna Adan Ismail, With Wendy Holden
Format: Paperback
Release Date: 03/09/2020
Pages: 336
ISBN: 978-0-00-830538-3
Edna Adan Ismail was Foreign Minister of Somaliland from 2003 to 2006, and had previously served as Somaliland's Minister of Family Welfare and Social Development.She is the director and founder of the Edna Adan Maternity Hospital in Hargeisa and an activist and pioneer in the struggle for the abolition of female genital mutilation. She is also President of the Organization for Victims of Torture.She was married to Mohamed Haji Ibrahim Egal who was Head of Government in British Somaliland five days prior to Somalia's independence and later the Prime Minister of Somalia (1967–69) and President of Somaliland.

A Woman of Firsts: The midwife who built a hospital and changed the world

Edna Adan Ismail endured it all – for the women of Africa.