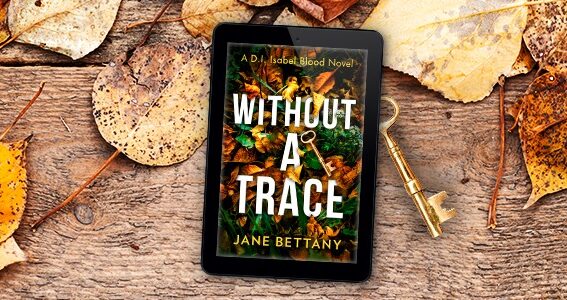 Read an extract from WITHOUT A TRACE

The rain was relentless; cold and spiteful. Its stinging wetness slapped at Ruth Prendergast’s face as she dashed from her car towards the shelter of the porch. After putting down the groceries she was carrying, she pulled a key from her pocket, unlocked her front door, and hurried inside.

A warm, centrally heated fug closed around her as she stepped into the hallway. Ruth felt for the light switch and flicked it   on, glancing censoriously at the scuffed paintwork and gloomy wallpaper. First impressions were important, and her hallway was definitely letting the side down.

After yanking a handful of junk mail from the teeth of the letterbox and hanging up her coat, she threw open the double doors to the living room and turned on more lights to brighten things up. Except for the ticking, clicking sound of the central heating radiators, the silence in the house was absolute.

Ruth had moved to Hollybrook Close three weeks earlier, and was struggling to adjust to the suburban seclusion of her new home. Weirdly, she missed the constant buzz of the traffic-infested main road where, until recently, she had lived with the man who was now her ex-husband.

At the end of the hallway, the kitchen door stood open. She went in and turned on the oven, threw her house keys into the half-empty fruit bowl, and went back to retrieve the shop- ping bags from the porch. Most evenings she enjoyed cooking a meal-for-one from scratch, something wholesome and tasty, but today’s dinner would be a ready-made pizza and a large glass of Chardonnay. She’d had a long and vile day at work, made worse by the tedious and tiring trek around the supermarket on her way home.

All afternoon she’d been unable to shake off a restless, empty feeling. She felt dull and lacklustre, her vitality jaded by yet another dreary January day. Ruth was a summer person and she yearned for the end of March, when the clocks would go forward into British Summer Time. Bring it on, she thought. Light nights, sunny days, warm breezes. She could do with some of that.

Shivering involuntarily, she began to unpack the groceries. It was a loathsome but necessary chore – albeit one that was slightly easier these days, thanks to the abundance of cupboard space in her new kitchen.

When the last items of shopping had been stashed away, she unwrapped the pizza, slid it into the oven, and set the timer before going upstairs with an armful of toiletries. The silence moved with her, creeping through the house like a virus.

In the bathroom, Ruth caught sight of herself as she crammed shampoo and toothpaste into the narrow, mirrored cabinet next to the washbasin. She looked a wreck. Wet from the rain, her fringe clung to her forehead unattractively. There was no getting away from it, she’d have to blitz it with the hairdryer, possibly even the straighteners.

As she crossed the landing to her bedroom, the shriek of an animal pierced the night air. The sound was coming from the field directly behind Hollybrook Close. The cul-de-sac was on the northern edge of Bainbridge, wedged incongruously between the bustle of the lively market town and a vast expanse of open countryside. At night it was eerily quiet here and she found the seclusion unnerving. Would she ever get used to living in semi- isolation? Leaving her husband, getting a new job and moving to a different town was supposed to have been a fresh start, but she wasn’t convinced this house would bring the contentment she longed for.

Ruth didn’t bother turning on the main light as she went into the bedroom. Its yellow glow was too harsh and made her look jaundiced. Instead, she reached across to switch on the cosier, more flattering lamp on the bedside cabinet.

That’s when she saw the man, lying in her bed.

‘What the …!’ She leapt away, scrabbling for the main light switch. ‘Who the hell are you?’

When he didn’t reply, Ruth leaned over and prodded him tentatively, but still he didn’t move. Her heart banged a warning against the inside of her ribcage. Instinct told her to flee, to hurry from the house and get help … but who could she call? She didn’t know any of the neighbours yet, and she had no friends in the area. There was her ex, of course, but he lived miles away and they weren’t exactly on speaking terms.

The man was clearly in a deep sleep, tucked under the duvet with his back to her. Ruth reached out and touched his shoulder, shaking it gently to wake him.

When he didn’t respond she tiptoed around the bed and looked down at the unfamiliar contours of his face – at the thick waves in his greying hair and the kink in his nose. It was the way he was staring that chilled her bones. His eyes were green. Unblinking. That’s when she knew.

The man in her bed was dead.

Without a Trace is out now in paperback, eBook and audio!