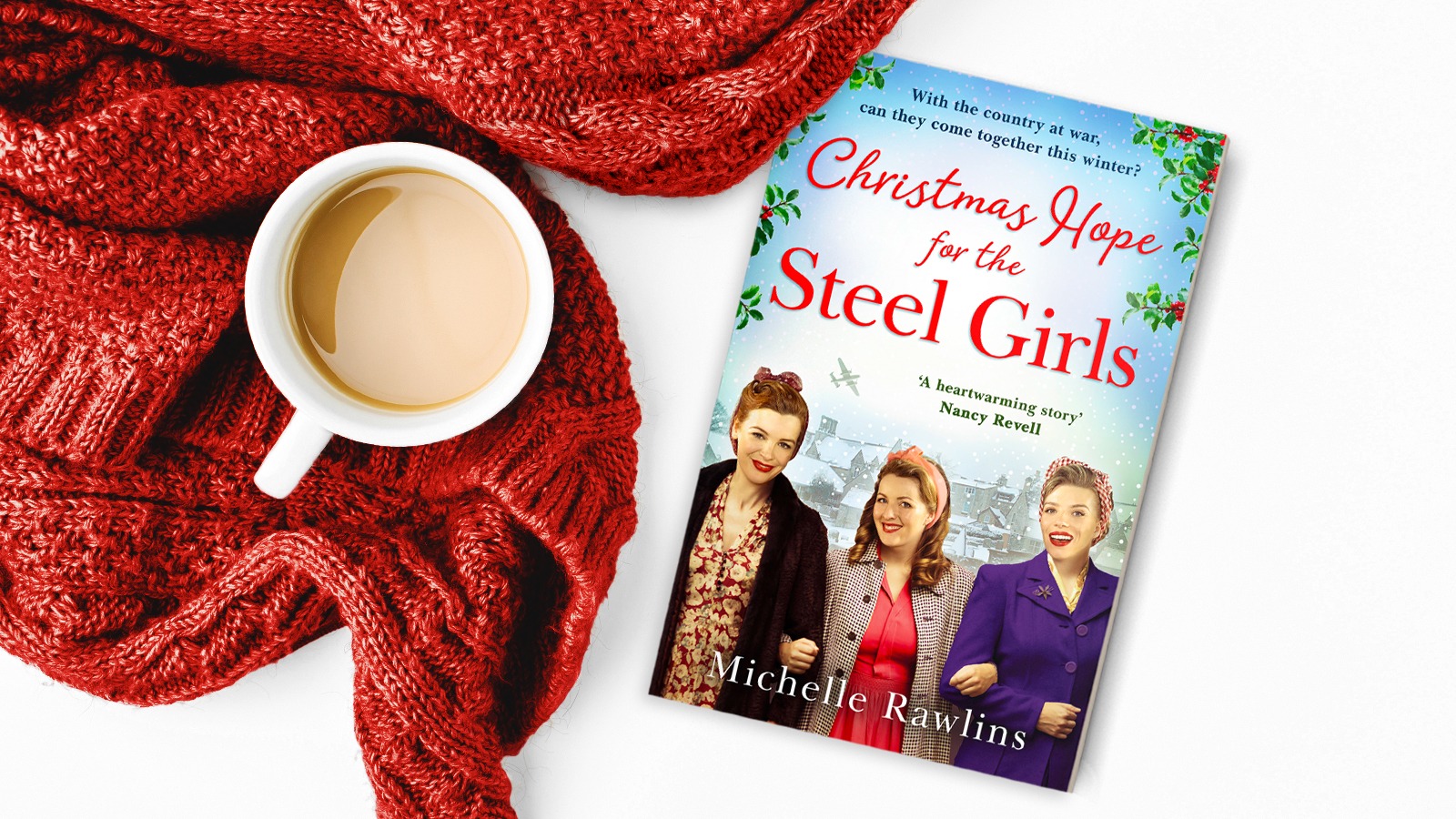 Read an extract of Christmas Hope for the Steel Girls!

As they sat on their favourite park bench, their hands entwined, Betty wrapped up in her brown tweed winter coat, the chilly autumnal air that was a sharp reminder

winter was on its way biting at her flushed cheeks, she felt the happiest she had in weeks.

‘I’m so sorry my letters never arrived,’ William said, turning to face his young sweetheart. ‘I promise I wrote whenever I could, only missing the odd night when I was so exhausted after training that I fell into bed, unable to keep my eyes open a minute longer.’

‘It’s me who should be saying sorry.’ Betty smiled weakly, feeling guilty about how she’d dug in her heels and stopped writing to William after she hadn’t heard from him for several weeks. ‘I feel embarrassed and annoyed at myself for ever doubting you. I should be utterly ashamed of myself. I just got scared you had forgotten about me.’

‘Oh, my lovely, sweet Bet, please never think that. But it’s understandable – what in heaven’s name were you supposed to think when not one of my many letters arrived? I assure

you, though, there’s nothing in the world that would stop me thinking about you – not even Hitler himself. It’s the thought of seeing you again that gets me through each day.’ Betty squeezed William’s hand a little tighter. Over the last few weeks she had been on a roller-coaster ride of emotions. After her beloved William had left their home city of Sheffield to start his RAF training to become a fighter pilot, nearly thirty miles away at the other side of Doncaster,

If being terrified her first and only true love of her life would be in danger once he took to the skies in one of those gravity-defying monstrosities wasn’t enough, Betty had tormented herself with ideas that William had forgotten about her when his normally frequent and cheery letters stopped dropping through the letter box.

She’d spent weeks hardly sleeping, staring at the ceiling, convincing herself William’s new life had opened his eyes to a different and exciting world, one that didn’t include herself. In the meantime, Betty had tried to keep her mind busy by working at Vickers, the steel factory where she had taken a job as one of their first female crane drivers, two months earlier. And for a while, it had worked. After one of her colleagues, Patty, had fallen from a ladder, leaving her off her feet for a couple of weeks, in her normal pragmatic way Betty had sprung into action. Without Patty’s wage coming in, money would be tight for her parents, who had five hungry children, including Patty, to feed, so she’d set up a new Care Club, organizing a whip-round and using the

money to buy meat and groceries for the family. Helping the Andrews family had got her thinking about what else she could do. There had to be some positives come from this war and it was nice to be able to do your bit and help those in need. Although Hitler and his mammoth army of sinister-looking troops hadn’t invaded England yet, Betty wasn’t naive enough to think they had got off lightly. The power-hungry dictator had already marched his soldiers through Czechoslovakia and Poland, obliterating towns and cities, leaving countless fatalities in his wake. No one knew how and when this war would end, but Betty was determined not to sit back, and to do anything she could to make a difference, however small.

All this had certainly helped keep her mind busy, but she’d still spent countless hours fretting about her William, who she had been courting for over two years now. Before Neville Chamberlain had made his monumental announce- ment to the country that England was now at war with Germany, he’d shared his dream of soaring across the skies in a Spitfire and becoming, in his words, ‘the greatest pilot the RAF had seen’.

Then, last night, just when Betty thought she couldn’t cope a moment longer with the torment of it all, William had surprised her in the most unexpected of manners. Betty, Patty and their third steelworker friend, Nancy, had arranged to go to the weekly dance at the City Hall, in the heart of Sheffield, with Patty’s new boyfriend Archie and her best friend Hattie. But the sight of seeing so many Saturday night

revellers enjoying themselves, let alone couples entwined in one another’s arms, was too much, a painful reminder of what she assumed she’d now lost after not hearing from William for so long. In floods of tears and with a heavy ache in her heart, Betty had announced she was going home, not wanting to spoil her friends’ much awaited night out by being miserable company. Nancy, in her typically kind and motherly manner, had insisted on walking Betty to the door, but just as they stepped out onto the paved precinct of Barker’s Pool, an unexpected appearance had stopped them in their tracks. To their utter surprise, it was William!

Nancy had quietly disappeared, making her way back to her friends at the dance, leaving William to take Betty in his arms, their salty tears merging, rendering the pair speechless for a couple of minutes as they happily collapsed into one another.

When they were finally able to speak, William was as perplexed as Betty as to why none of his letters had arrived, including the note to say he had been granted forty-eight hours’ weekend leave and he couldn’t wait to see her. He’d fully expected to see Betty waiting for him when he’d rushed from Sheffield train station to Betty’s lodgings on Collinson Street, in Walkley, but to his shock and confusion her land- lady, Mrs Wallis, had explained Betty was out dancing with her Vickers pals. After a frantic dash across town, William had finally tracked down his somewhat dishevelled and heartbroken sweetheart.

Only after they had enveloped each other in their arms,

taking it in turns to wipe away one another’s tears, had the clearly devoted pair made their way back into the dance hall and joined Betty’s new friends, before William had insisted they joined the scores of other couples swaying to Glen Miller’s ‘Moonlight Serenade’. Within minutes it was as though they had never been parted, slipping back into the easiness and closeness between them.

At the end of the night, William had escorted Betty home, safely delivering her to the doorstep of her lodgings, where she had resided since leaving home four years earlier, at the tender age of nineteen. As he’d tenderly kissed Betty goodnight, cupping her cheeks in his hands, William hadn’t rushed to break away, wanting the moment to last forever, and Betty didn’t resist.

‘I’ve missed you so much and dreamt of this moment coming back to you,’ he’d whispered, their lips finally part- ing. ‘I want to make the most of every single moment of my leave, so I’ll call on you tomorrow mid-morning and we can go for a walk.’

‘That would be lovely,’ Betty had replied, in a dream- like trance, still in disbelief at how her night had ended, especially after the upset and uncertainty of a few hours ago. After she had waved William goodbye, watching him walk down the dark tree-lined street, the blackness quickly swallowing her sweetheart, his silhouette disappearing into the shadows, Betty let herself into her comfortable lodgings. Her landlady, Mrs Wallis, who had been more like a second mum to her since war had been announced, was already

in bed. It had been a long day, and her eyes were heavy, so despite the excitement of the evening, Betty climbed the stairs to her room, as though she was walking on air. She’d undressed quickly and snuggled under her pink floral eiderdown, for the first time in weeks a welcome sleep beckoning.

Treat yourself to a copy of this heartwarming wartime saga novel here to continue reading and join the Steel Girls – Betty, Nancy and Patty – in this fabulously festive new adventure.