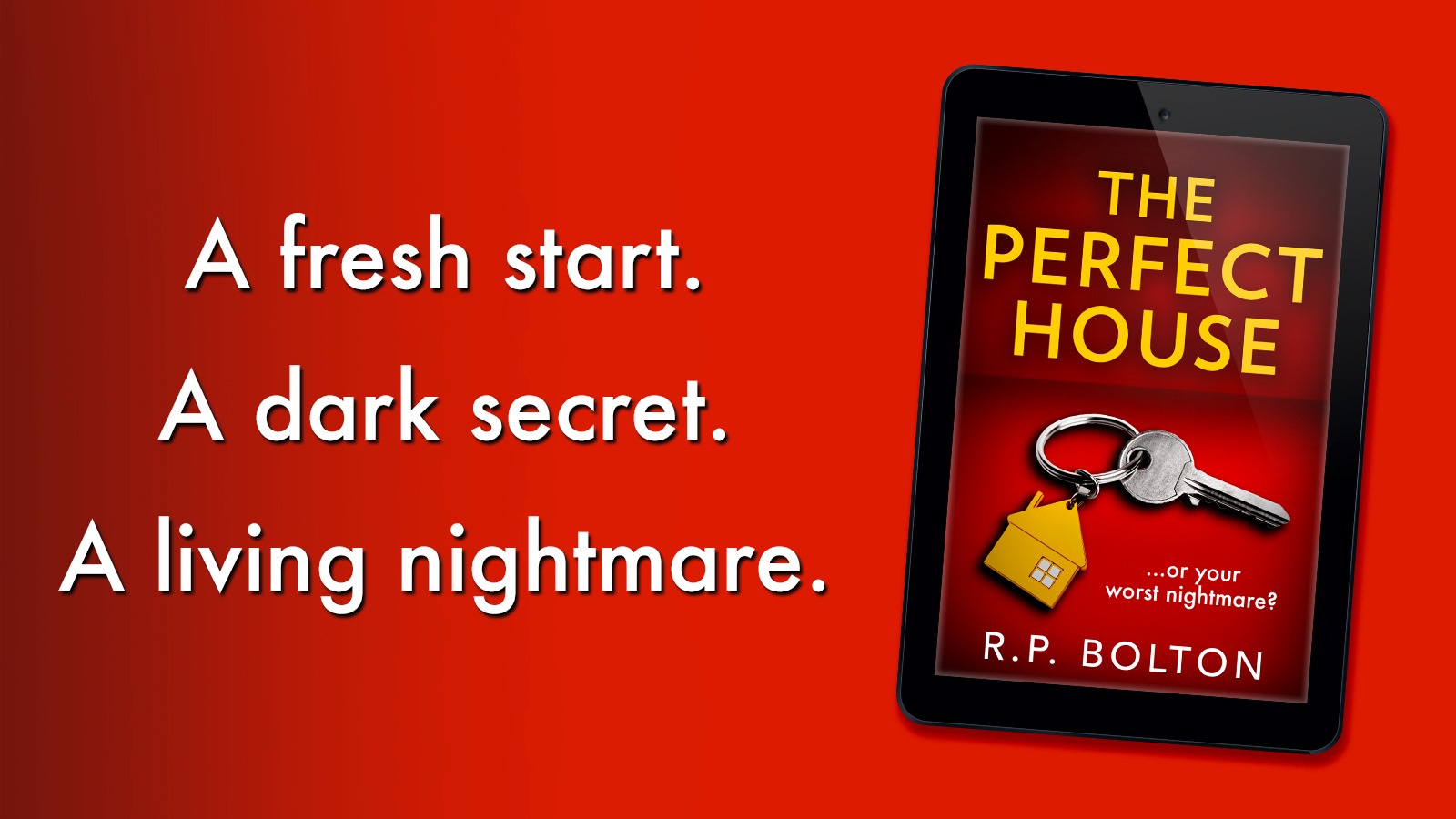 R.P. Bolton on ‘not freaking out the neighbours’!

Today we publish the tense and chilling debut thriller The Perfect House by R.P. Bolton! To celebrate, the author shares the real-life inspiration behind this gripping tale…

There was no other word to describe the couple who had just moved in. And with  two gorgeous boys – one a toddler, one a new-born –  in tow, our street’s average age tumbled. You see, until recently, most of our neighbours had been widows and couples who had sent their children and grandchildren into the world before settling into retirement.

Sadly and inevitably, our elderly neighbours passed on one by one. Within the space of two years, the street’s demographic had flipped from one house with a child, to one house without and that’s when the lovely family moved in down the road.

They joined the Neighbourhood Watch. When I bumped in to them, we had long conversations about the local area, schools, our equally crazy dogs…all the usual. Their house needed a lot of updating. They apologised for the tradespeople, vans and the semi-permanent skip pitched on their side of the road.

And throughout this, a morbid thought constantly scratched at my mind. When they sat on their sofa watching TV, did it freak them out that the previous owner died right there on the floor? Did they even know?

Should I tell them?

Well, I never did and they never mentioned it. I don’t live on that street anymore, but the idea seeded in my brain and grew alongside a story I’d been told years earlier, a real-life ghost story.

There was a girl I used to know. The most down-to-earth, head-screwed-on-tight, old-fashioned Yorkshire girl you could imagine. At university, she lived in halls for the first year and a rented Leeds terrace that had seen better days in the second. Five bedrooms, one bathroom and a shared kitchen. Perfect. There was even a lounge with a tatty sofa and two armchairs angled towards a TV. Students had lower standards back then, of course, and for £22 a week, the threadbare swirly carpets, avocado bath suite and mismatched second-hand furniture came as standard. So, September came and the five girls moved in.

A few days into their tenancy, everything was fine. It was a week night and dinner eaten, the five of them crammed on the sofa and armchairs to watch Coronation Street. As the girl I knew told me later, she had just swallowed a mouthful of tea when a woman appeared – blink. Black-haired and wearing a white nightdress, she stood next to the TV, facing the sofa. Not smiling or frowning or speaking, just there. Solid as any other person in the room.

Then – blink – the woman vanished. Three of the friends carried on talking, but the girl I knew and one other turned their heads.

‘Did you just see -?’ they said simultaneously, their shock mirrored in identical expressions.

None of the others saw anything apart from Coronation Street. But when the stunned pair compared notes, they both described exactly the same black-haired woman, from the frilly collar on her nightdress down to her bare feet.

I’ve always been fascinated by the history of houses and the idea that, like with any new relationship, you never really get a blank canvas. When I started to write, I knew I wanted to create a sense that houses carry as much emotional baggage as people – something my main characters, Ellie and Tom, discover when they buy 6 Moss Lane and bit by bit, the house’s sad history is revealed. The boundaries between the past and the present blur until it’s impossible to say where one ends and the other begins.

Do I believe in haunted houses? I don’t know. But the lovely neighbours and the story of the ghostly figure by the TV certainly haunted me and together lit the spark for The Perfect House.

And finally, in case my lovely former neighbours are reading this, please forgive me. I hope I haven’t freaked you out.

The Perfect House by R.P. Bolton is out now in eBook and available for just 99p!