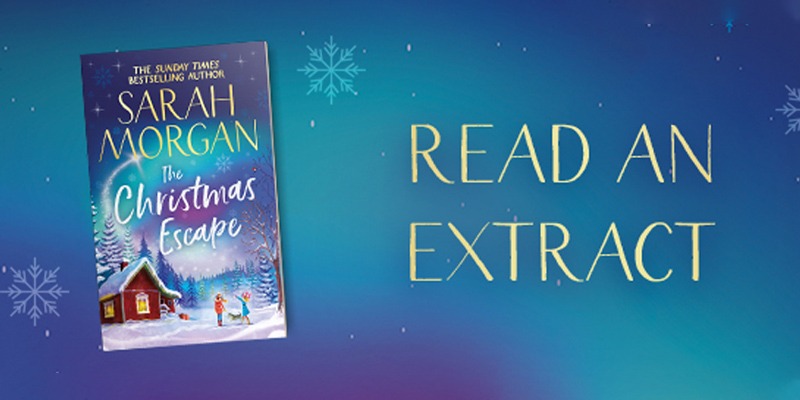 The Christmas Escape is the latest book from Sunday Times bestselling author Sarah Morgan, and we can’t think of anyone better to escape with this festive season!

If you liked One More for Christmas and A Wedding in December, we’re sure you are going to love this! And if you simply can’t wait to find this book under your Christmas tree later this year, then scroll down for an exclusive early extract…

Someone less cynical might of thought of it as a Christmas miracle, but Robyn no longer believed in miracles. She was terrified, but layered under the terror was a seam of something else. Hope. The kaleidoscope of emotions inside her matched the swirl and shimmer of color in the sky. Here in Swedish Lapland, north of the Arctic Circle, the unpolluted skies and clear winter nights made for frequent sightings of the northern lights.

She heard the door open behind her, heard the soft crunch of footsteps on deep snow and then felt Erik’s arms slide around her.

“One more minute. I need to think…” She’d always done her best thinking here, in this wild land where nature dominated, where a human felt insignificant beneath the expanse of pink-tinted sky. Everything she’d ever done that was foolish, selfish, risky or embarrassing shrank in importance be- cause this place didn’t care.

Trees bowed under the weight of new snow, the surface glistening with delicate threads of silver and blue. The cold numbed her cheeks and froze her eyelashes, but she noticed only the beauty. Her instinct was to reach for her camera, even though she already had multiple images of the same scene.

She’d come here to escape from everything she was and everything she’d done and had fallen in love with the place and the man. It turned out that you could reinvent yourself if you moved far enough away from everyone who knew you.

Erik pulled the hood of her down jacket farther over her head. “If you’re thinking of the past, then don’t.”

How could she not?

Her old self felt unfamiliar now. It was like looking at an old photo and not recognizing yourself. Who was that woman?

“I can’t believe she’s coming here. She was three years old when I last saw her.”

Her niece. Her sister’s child.

She remembered a small, smiling cherub with rosy cheeks and curly blond hair. She remembered innocence and accep- tance and the fleeting hope of a fresh start, before Robyn had ruined it, the way she’d ruined everything back then.

Her sister had forbidden her to ever make contact again. There had been no room for Robyn in her sister’s perfect little family unit. Even now, many years later, remembering that last encounter still made her feel shaky and sick. She tried to imagine the child as a woman. Was she like her mother? Whenever Robyn thought about her sister, her feelings became confused. Love. Hate. Envy. Irritation. She hadn’t known it was possible to feel every possible emotion within a single relationship. Elizabeth had been the golden girl. The perfect princess and, for a little while at least, her best friend in the world.

Time had eased the pain from agony to ache.

All links had been broken, until that email had arrived. “Why did she get in touch now, after so long? She’s thirty. Grown.”

Part of her wanted to celebrate, but life had taught her to be cautious, and she knew this wasn’t a simple reunion. What if her niece was looking for answers? And what if she didn’t like what she heard?

Was this a second chance, or another emotional car crash? “You can ask her. Face-to-face,” Erik said, “but I know you’re nervous.”

“Yes.” She had no secrets from him, although it had taken her a while to reach the point where she’d trusted their re- lationship not to snap. “She’s a stranger. The only living member of my family.”

Her sister was gone, killed instantly two years earlier while crossing the road. There was no fixing the past now. That door was closed.

Erik tightened his hold on her. “Your niece has a daughter, remember? That’s two family members. Three if you count her husband.”

Family. She’d had to learn to live without it.

She’d stayed away, as ordered. Made no contact. Rebuilt her life. Redesigned herself. Buried the past and traveled as far from her old life as she could. In the city she’d often felt trapped. Suffocated by the past. Here, in this snowy wilder- ness with nature on her doorstep, she felt free.

And then the past had landed in her inbox.

“Was it a mistake to ask her here?” It was the first time she’d invited the past into the present. “Apart from the fact we don’t know each other, do you think she’ll like this place?” For her it had been love at first sight. The stillness. The swirl of blue-green color in the sky, and the soft light that washed across the landscape at this time of year. As a photographer, the light was an endless source of fascination and inspiration. There were shades and tones she’d never seen anywhere else in the world. Midnight blue and bright jade. Icy pink and warm rose.

Some said the life up here was harsh and hard, but Robyn had known hard, and this wasn’t it. Cold wasn’t only a measure of temperature, it was a feeling. And she’d been cold. The kind of cold that froze you inside and couldn’t be fixed with thermal layers and a down jacket.

And then there was warmth, of the kind she felt now with Erik.

“Christmas in Lapland?” He sounded amused. “How can she not like it? Particularly as she has a child. Where else can she play in the snow, feed reindeer and ride on a sled through the forest?”

Robyn gazed at the trees. It was true that this was paradise for a Christmas-loving child, although that wasn’t the focus of the business. She had little experience with children and had never felt the desire to have her own. Her family was Erik. The dogs. The forest. The skies. This brilliant, brutal wilderness that felt more like home than any place she’d lived.

The main lodge had been handed down through generations of Erik’s family, but he’d expanded it to appeal to the upper end of the market. Their guests were usually discerning travelers seeking to escape. Adventurous types who appreciated luxury but were undaunted by the prospect of heading into the frozen forest or exploring the landscape on skis or snowshoes. Erik offered his services as a guide when needed, and she, as a photographer, was on hand to coach people through the intricacies of capturing the aurora on camera. You couldn’t predict it, so she’d learned patience. She’d learned to wait until nature gave her what she was hoping for.

Through the snowy branches she could see the soft glow of lights from two of their cabins, nestled in the forest. They were five in total, each named after Arctic wildlife. Wolf, Reindeer, Elk, Lynx and Bear. Each cozy cabin had floor-to-ceiling windows that offered a breathtaking view of the forest and the sky. The Snow Spa had been her idea and proved a popular addition. The focus here was wellness, with an emphasis on the nature that surrounded them. She and her small team used local resources whenever they could. Guests were encouraged to leave phones and watches behind.

She felt a moment of panic. “The last time I saw Christy— well, it wasn’t good.” The kitten incident. The memory of that visit was carved into her soul. Despite all her good intentions, it had gone badly wrong. “What age do children start remembering? Will she remember what happened?” She hoped not. Even now, so many years later, she could still remember the last words her sister had spoken to her.

You ruin everything. I don’t want you in my life. Robyn pressed closer to Erik and felt his arms tighten. “It was a long time ago, Robyn. Ancient history.”

“But people don’t forget history, do they?” What had her sister told her daughter?

She wondered what her sister would say if she could see her now. Happy. Married to a man she loved. Living in one place. Earning a good living, although no doubt Elizabeth would see it as unconventional.

Christy, it seemed, was happily married and living an idyllic life in the country, as her mother had before her.

What would Elizabeth say if she knew her daughter was coming to visit?

Robyn gave a shiver and turned back toward the lodge. Elizabeth wouldn’t have been happy, and if she could have stopped it, she would have done so. She wouldn’t have wanted her sister to contaminate her daughter’s perfect life.

The Christmas Escape is out now! Available to pre-order now from Amazon, Waterstones, Bookshop.org, Foyles, Hive and local independent bookshops!