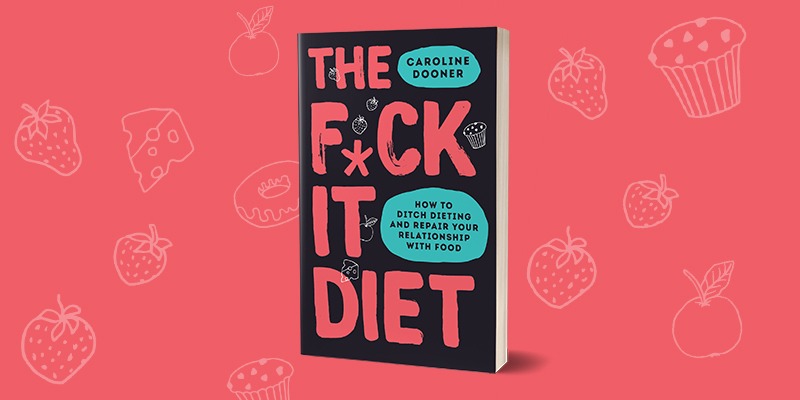 Caroline Dooner: The F*ck It Diet

This week, we publish the paperback edition of Caroline Dooner’s life-changing book The F*ck It Diet. Today she joins us on the blog to discuss the inspiration behind the book, and why The F*ck It Diet is so important.

All my life, I thought I was a food addict. I binged on my friend’s cool snacks when I was a child (I came from a health nut household). And once I started dieting in high school, I binged even more. I could not, for the life of me, stick to a diet for more than a few months, and sometimes I couldn’t even stick to a diet for a few days. I felt completely out of control around food. I thought about food constantly. I was always hungry. Always planning out my next meal/snack. I was obsessed with food, and no matter how much I cared about sticking to my diet, I always ended up blowing it and gaining all the weight back that I’d lost.

My attempts to stick to my diet, and my guilt over food, and obsession over the weight I gained and lost and gained again, were taking up a lot of time, and a lot of brain space. But it all seemed like a noble cause, because one day, I’d finally find the right diet, and stick to that diet for good, and it would all be worth it.

My very last diet before I gave it up completely was the paleo diet – a mostly low-carb “primal” diet  – and I was all in. I listened to paleo podcasts, read paleo message boards and paleo blogs. My whole life became dedicated to being paleo. One day, on one of the paleo blogs I read religiously, the blogger wrote that going low carb had messed up her hormones and made her become infertile. She stopped getting her period and wasn’t able to get pregnant with the second child she wanted… so she decided she needed to eat more carbs, sleep a lot, and gain weight to try and heal her hormones.

This blew my mind. The idea that dieting could be bad for you was completely new to me. And it made me think back on my years and years of irregular or absent periods that I blamed on not being good enough with diet. I had been trying to heal my hormones for a decade by going low carb, and… now I was learning that was maybe making it all worse?

I’d read the Intuitive Eating book a few years before this and learned about how dieting wires you to feel out of control with food, but when I’d tried it, it didn’t “work” for me. I still felt out of control around food. But what this new realization had made me realized, is that all the time I thought I as intuitive eating, I was not. I was subconsciously micromanaging everything. I was still trying to eat the smallest amount possible, and I was still trying to be as thin as possible. And I wondered… is that why I still feel out of control with food? Because I never actually stopped dieting?

And … is what I need for my health and my relationship with food… to gain weight? I wasn’t underweight, but I was chronically putting myself back on restrictive diets. I never thought my problem was restricting, I thought it was overeating. But I was starting to wonder whether I’d gotten myself deeper and deeper into a cycle that was only going to keep getting worse and worse. And everything in my intuition was pointing towards: yes. Yes. It’s only going to keep getting worse. I decided I needed to step out of the cycle.

So I started researching, and I started eating. I read books from weight researchers who confirmed that our bodies will force us to put back on weight through bingeing, or even slowing down our metabolism and wiring us to be fixated on food. I learned that micromanaging our weight actually tends to end up being worse for our health longterm. I learned that it was smart and was safe to listen to my appetite.

So I started writing. I was so fed up with my own brain, and my fear around food and body image, that I decided I needed a radical outlook. I decided: “fuck it” – I needed to let go, eat the food, and buy the pant size (or two) up. I bought the domain “thefuckitdiet.com” and started writing about everything I was learning, and everything I was experiencing. I started noticing that the foods I amply allowed myself to eat started to lose their power over me. As the months went by, the more I ate, the less insane I felt around food. Foods I would have binged on started going stale and half eaten in my cupboard. And I started hearing from other people who read my site that the same thing happened to them. Eating really was healing. I started running little workshops to teach parts of the process.

The F*ck It Diet book is the culmination of everything I have learned, not only personally, but from anti-diet scientists and experts, and also from the many, many (at this point, hundreds of thousands of) other people who have gone through the process of healing their relationship to food.

The book is for people who have been dieting off and on for years, who can’t keep going, and suspect there is another way to approach food. It will explain why we are so out of control around food, and what we can do about it. I hope it brings you the peace it brought me.

The F*ck It Diet is available here.