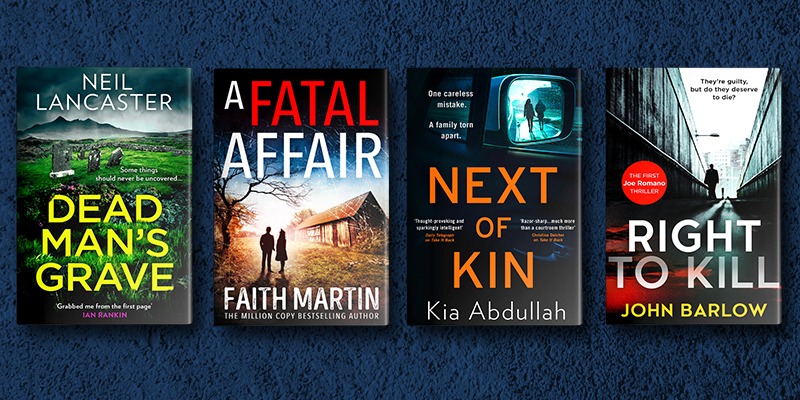 Your staycation just got a lot more thrilling!

This year is all about staycations and nothing completes a holiday at home than a good stack of books. Transport yourself around Great Britain with these four gripping HQ crime thrillers that will give your holiday a thrilling edge. To celebrate this year’s Theakston Old Peculier Crime Writing Festival in Harrogate, we are giving you the chance to read the first chapter of each book early and enter a competition to win the whole stack! Keep reading to find out more…

‘Grabbed me from the first page’ Ian Rankin

A breathtaking, chilling, Scottish crime fiction mystery thriller about blood feuds, corruption, and solving a case that could cost far more than just lives… Get ready for a break-out book from a hugely talented writer and a fascinating new protagonist – DS Max Craigie.

Neil Lancaster has worked for the Metropolitan Police as a Detective, investigating serious crimes in the capital and beyond. As a covert policing specialist, he has used a variety of tactics to obtain evidence against murderers, human traffickers, drug dealers and fraudsters.

Dead Man’s Grave is out now in eBook, and in hardback in September. Pre-order the hardback here.

Next of Kin by Kia Abdullah

A gripping, brave and tense courtroom drama – Next of Kin will keep you on the edge of your seat until the final, heart-stopping page. Follow an explosive, high-profile trial that will tear a family apart . . .Who do you think is telling the truth?

Kia Abdullah is an author and travel writer from London. She is the author of Truth Be Told and Take It Back, which was named one of the best thrillers of the year by the Guardian and the Telegraph.

Next of Kin is out in September. Pre-order here.

A Fatal Affair by Faith Martin

‘The pairing of Ryder and Loveday is a stroke of genius.’ Clare Chase

Can Ryder and Loveday crack the case before they too come to a nasty end?

Don’t miss the next gripping mystery from million-copy bestseller Faith Martin, set in 1960’s Oxford. When Ryder and Loveday are called in to investigate a young couple’s supposed murder and suicide, they realise quickly that they have a double murderer on the loose. It’s a race against time to catch the killer before the killer catches them.

Faith Martin has been writing for over 25 years, in four genres and under four different pen names. She was born in Oxford and sets most of her crime novels within sight of the city of dreaming spires.

A Fatal Affair is out now. Buy your copy here.

Right to Kill by John Barlow

Does anyone have the right to kill?

The first in a gripping new series set in Leeds and introducing Joe Romano, a half-Sicilian detective with deep roots in the community, Right to Kill highlights hot-button regional and national issues including racism, drugs and Brexit. When a drug dealer goes from missing to dead, it’s up to DS Joe Romano to find out who the killer is before he strikes again.

John Barlow was born in West Yorkshire. He worked as a university lecturer until 2004 and works as a writer, ghostwriter, food journalist and translator.

Right to Kill is out now. Buy your copy here.

Wish you could start reading these thrillers right now? You’re in luck as we’re giving you the chance to win all four books! To enter, just fill out the details below.