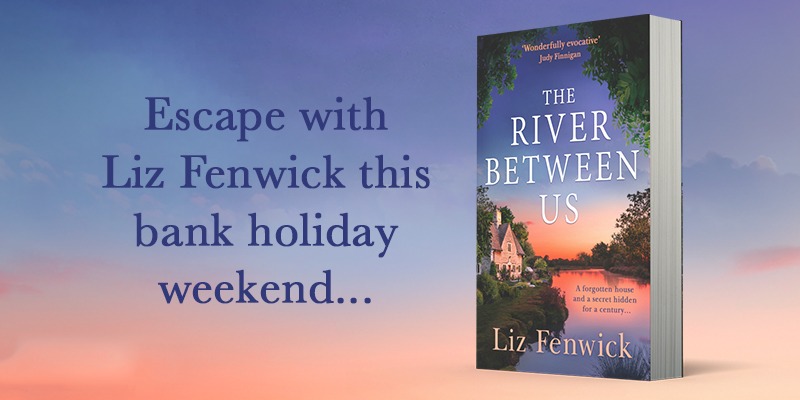 To celebrate the publication of Liz Fenwick’s gorgeous new novel, The River Between Us, on June 10th we’re giving you a sneak peek at chapter one! Treat yourself this bank holiday weekend by diving into this evocative, rich and atmospheric novel laced with secrets…

At the start of her new life, Theo stood alone on a medieval bridge spanning the Tamar, shivering in the mist and murk, neither in Devon nor Cornwall. That was Theo, never taking a side – but she had to now. Epic adventures always ended or began with a river, she reminded herself, as she walked across the bridge towards the Cornish bank, whether it was the Styx, the Seine, the Thames or the Tamar.

According to the sign illuminated by her phone, Horsebridge had been built in 1437, and at this moment she felt older than it and certainly less solid as her finger traced the cold stones. It was midnight, the witching hour, and she stood, bone-tired, looking at her ancient Volvo estate with a flat tyre and a jack that was rusted to uselessness. A sensible person would have checked before setting off on a long journey and she hadn’t. If her car wasn’t blocking the bridge, she would have gone to sleep in it, praying that things would not only appear brighter in the morning with the dawn, but they actually would be… somehow. This flat tyre was only a small delay. It wasn’t final or fatal. It was flat and fixable.

Fortunately, she had phone signal and had been able to.

call for help. The irony hadn’t escaped her that emergency assistance was on its way to a Mrs Piers Henshaw, who didn’t exist anymore. Yesterday the decree absolute ending her mar­riage had come into effect.

Above an owl cried. No moon, no stars; just a soft mizzle. A few miles from here there was an old cottage. It was hers. She’d bought it, sight unseen. No doubt her mother, given the opportunity, would say that was typical. On the basis of nothing more than a few fuzzy pictures and the reasonable price tag, Theo had bought the cottage. It seemed to need her, and if her brother Martin was right, she needed the cottage too. Living there would be a fresh start. She pulled out her phone and looked at the details again while she waited.

First time to the market in seventy years. A delightful two-bedroom cottage with ten acres of woodland on the Cornish bank of the Tamar in an area of outstanding natural beauty. Built in 1819, the cottage requires modernisation.

Originally constructed as part of the Duke of Exeter’s estate, Abbotswood, and designed in the picturesque style by Sir Jeffrey Wyattville, the cottage was used as staff accommodation until the 1950s. The dwelling consists of a large reception room, a kitchen, a pantry, a family bathroom and two double bedrooms. There are several small outbuildings in need of repair.

The ten acres of woodland rise from the banks of the Tamar and up the hill behind. The wood consists of native and several large specimen trees planted following the plans of noted land­scape designer Humphry Repton.

The cottage is reached by a permissive drive along the Cornish bank of the Tamar, accessed after crossing Horsebridge when approaching from the north.

The River Between Us from Liz Fenwick is coming June 10th!