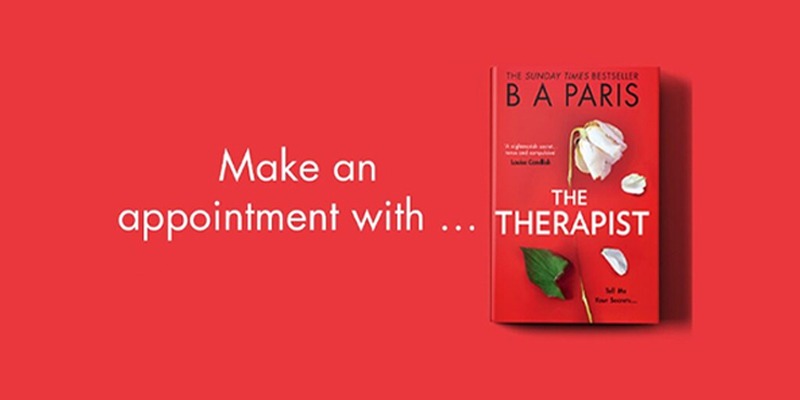 Looking for something to read on your coffee break? Why not try this short story, I Have to Tell Her, by Sunday Times bestselling author B A Paris? Read on to delve into the story, and treat yourself to the first six chapters of The Therapist, the gripping new psychological thriller out today!

I HAVE TO TELL HER by B A Paris

Helen had been looking forward to today for months. But now, when she saw Jenny waving to her from the other side of the road, all she felt was dread. How do you tell your best friend, on the day that you’re going to help her choose a wedding dress, that her husband-to-be is having an affair?

She watched as Jenny dashed across the road. She looked so happy, so excited. Helen hated that she was going to break her heart but she couldn’t let Jenny marry a man who was cheating on her. She wished she hadn’t seen Carl with the woman young enough to be his daughter. But she had, not once, but twice.

‘Thank you for taking a day off work,’ Jenny said, giving Helen a hug. ‘There’s nobody I’d rather have by my side today. The first appointment is at ten, so we’d better hurry.’

‘Could we have a coffee first, do you think?’ she asked, her heart heavy with dread.

Jenny checked her phone. ‘Sorry, it’s already five to. I’ve got so much to tell you but we’ll have to talk over lunch.’ She linked her arm through Helen’s.  ‘So, how are you?’

‘He’s fine, better than he’s ever been,’ Jenny said happily.

I bet he is, Helen thought resentfully. How could he? How could he cheat on someone as lovely as Helen?

She’d been at Waterloo, heading to the bookshop to buy something to read on the train home, when she’d seen Carl standing outside Foyles.  She was just about to wave to him, glad to have someone to travel with, when a young woman came running up and threw herself into his arms. It wasn’t the sort of hug that you might give a friend; it was a long, tight, never-want-to-let-you-go hug that went on for so long Helen had felt embarrassed just watching. She’d turned away, trying to tell herself that she was mistaken, that it wasn’t what she thought. But when she looked back, Carl and the woman – pretty, blonde, petite – were staring into each other’s eyes.

‘Here it is,’ Jenny said, coming to a stop outside the Bridal Boutique. ‘I’ve looked at their website and they have some lovely dresses. And if I don’t find one here, we have another appointment this afternoon.’

Jenny – pretty, but not blond or petite – tried on eight dresses and looked lovely in all of them.

‘But which do you like best?’ she asked Helen anxiously. ‘They’re all very different so there must be one that suits me more than the others.’

‘The second one you tried on,’ she told Jenny. ‘You looked absolutely stunning.’ She still didn’t know if the tears that had sprung to her eyes were because of the dress or because she knew that Jenny might never get to wear it.

‘Really?’ Jenny looked delighted. ‘That’s the one I prefer. It felt right and I loved the neckline. I’d still like to go to the other boutique but shall we have lunch first?’

She couldn’t believe it when Jenny chose the very bistro where she had seen Carl and the blond woman for the second time. The bistro was tucked down a side road and Helen had only been there by chance. She’d taken a short cut through town to avoid heavy traffic on the motorway. A red light had brought her to a halt right in front of the bistro and through the window, she’d seen them chatting and laughing together.

‘Helen, are you alright?’ Jenny asked once they were sitting down. She looked worriedly at her friend. ‘You seem a bit distracted, a bit down.’

Helen shifted in her seat. This was it, the moment when she broke Jenny’s heart.

‘It’s just that I’ve got something to tell you.’

‘I’ve got something to tell you too,’ Jenny said excitedly. She looked as if she was about to burst. ‘Can I go first? It’s so monumental that I can’t keep it to myself any longer.’ She took a deep breath. ‘Carl has a daughter!’

Helen stared at her friend. ‘A daughter?’

‘Yes. I didn’t tell you before because he didn’t want anyone to know, he said it wasn’t worth saying anything as he’d never had any contact with her. He was sixteen when his girlfriend got pregnant and although she kept the baby, her parents didn’t want their daughter to have anything more to do with Carl. Carl was so young he didn’t realise the consequences of relinquishing his rights and when the family moved away, Carl accepted he would never know his daughter and that she would never know him. But he’s never stopped thinking about her, hoping that one day she would try and find him. And then, a few weeks ago, she contacted him out of the blue. She’s twenty-one now and absolutely lovely. Carl met her by himself first and then introduced her to me. We got on so well that I’ve asked her to be a maid of honour at the wedding!’

A strange weakness came over Helen. ‘You don’t know how glad I am that you told me that.’ Tears of relief filled her eyes. ‘I saw them, Jenny, I saw Carl with his daughter and I thought – well, I thought he was having an affair. And I’ve been dreading telling you.’

Jenny burst out laughing. ‘An affair? I’m sorry, Helen,’ she added contritely. ‘I shouldn’t be laughing, it must have been terrible for you.’

Helen blinked back the tears. ‘It was. At first, I didn’t know if I should tell you, but then I thought, if it was me, I’d want to know.’

‘I’d absolutely want to know,’ Jenny said firmly.  ‘You really are the best friend ever.’ She looked around for a waiter. ‘Shall we order some wine? I think we could both do with a drink after that.’

‘I think I might need a bottle.’ Helen looked across at her friend. ‘I thought I was about to destroy your life.’

‘It’s not fault, I shouldn’t have jumped to conclusions. Please don’t tell Carl.’

‘I won’t,’ Jenny promised. ‘Although he’d probably find it funny.’

Helen sat back in her chair, able to relax for the first time in weeks. ‘He must be ecstatic to have a ready-made daughter, especially when he’d given up all hope of ever seeing her.’

Jenny nodded enthusiastically.  ‘He is. And you know what the best thing is? She looks exactly like him – tall, with the same black curls and the same dark eyes!’

The Therapist, the new gripping novel by B A Paris, is out now! You can read the first six chapters here.

Interested in reading more? Buy your copy of The Therapist now from your local independent, bookshop.org, Hive, Waterstones, or Amazon.