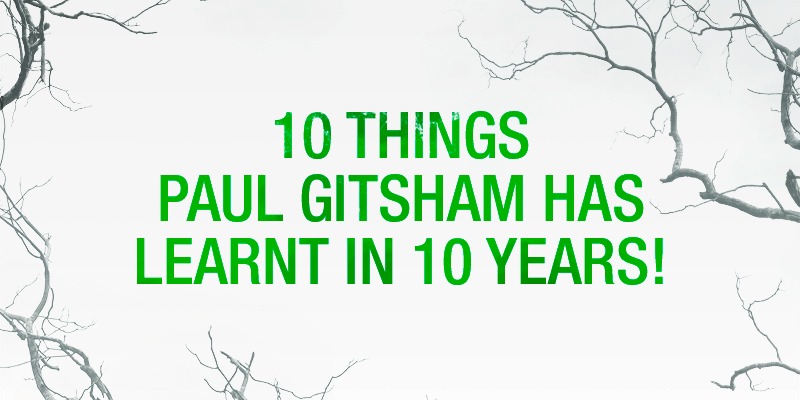 Today marks ten years since Paul Gitsham first introduces us to DCI Warren Jones. To celebrate, Paul is here on the blog sharing the ten things he has learnt over the past ten years. Keep your eyes peeled on our social today for a sneak peak at what is to come for DCI Jones…

DCI Warren Jones first made the leap from my brain to the page ten years ago this week (according to the file creation date on the Word file that eventually became The Last Straw). Therefore, in honour of ‘DCI Warren Jones day’ and the cover reveal for the upcoming Out of Sight, I am sharing ten things I’ve learned in ten years.

So, pour yourself a cup of strong coffee, pick all the salad out of your shop-bought cheese sandwich, stick on some Duran Duran, and settle back in your chair (oh, and don’t forget to put fifty pence in the honesty jar for your coffee!).

Obviously, not in real life. That would be wrong. And messy. But there is unquestionably a lot of satisfaction in bumping off a character in a really fiendish way. And if, purely by chance, they bear just a passing resemblance to someone who might once have annoyed you in real life … well, life’s full of little coincidences.

2. Working out how to get away with it is even more fun.

Whodunnits are all about the puzzle. Your killer will want to get away with it. Your detective will want to prove they did it. You, the writer, get to sit in the middle and pull their strings. Figuring out how to make that work is immensely satisfying.

3. Wikipedia is the procrastinator’s best friend.

The world’s favourite online encyclopaedia is an incredible resource for the busy writer. Whether it be the intricacies of the Police And Criminal Evidence Act (1984), the year that catalytic converters were first fitted to UK Audis, or a detailed comparison of different opiates, for years it’s been my first port of call when doing research. Along the way, I’ve also spent more time than can be reasonably justified reading about Henry VIII’s dissolution of the monasteries and the works of Edgar Allan Poe, when all I needed was a date for the former, and never actually used the latter.

4. There are a full twenty-six letters in the alphabet.

Feel free to use them all when choosing names.

I have a confession to make – I hate naming characters. I’ve got better at it over the years, and if you visit my Writing Tips blog at www.paulgitsham.com, or follow my #TuesdayTips on social media, I have shared some ideas to help other writers. But as my beta reader/fiancée keeps on pointing out, “you really like surnames that begin with the letter S.”

I am now paranoid about names that begin with that letter.

But typos can defeat us all.

I have a newfound respect for those tenacious little typographical errors that can survive a dozen rewrites by me, the eagle-eyed scrutiny of my three beta readers, and the professional gaze of my editor, copyeditor and proofreader – only to be spotted by a reader the week after publication. Some would argue that frankly, they’ve earned their place and should stay. Charles Darwin would almost certainly give them his seal of approval.

6. Semicolons are my new best friend.

As somebody educated in the 1980s, when punctuation and grammar were somewhat neglected in British schools, it was only when I started writing seriously that I found out that semicolons aren’t just used for winking emojis. They are amazing; use them more often.

7. It turns out that what I really wanted to be is a police officer.

Warren Jones is basically wish fulfilment; he really is a very thinly disguised version of his creator. Anyone who knows me will recognise Warren’s obsession with ‘80s music and the complete absence of any interest or knowledge about football, and will nod knowingly as he carefully removes all traces of salad or greenery from sandwiches or burgers. And yes, the recipe for potato waffle and Red Leicester cheese sandwiches on wholemeal bread featured in Out Of Sight is my own creation. You’re welcome.

8. I watch too many serial killer documentaries.

I never really watched true crime before I started writing seriously, when I eventually twigged that they are a professionally acceptable form of procrastination. But now I am hooked. It became apparent that I watch an unhealthy number of them when I realised that I have no idea (nor do I care) who the Kardashians are, but I follow all the experts on Britain’s Most Evil Killers on Instagram.

9. I can type with my left hand whilst cuddling my fiancée.

They say that those who watch serial killer documentaries together, stay together. I’m not sure who ‘they’ are, or if they even really exist, but one thing is for sure: the ability to open MS OneNote on my mobile phone with my only free hand and jot down story ideas as we lie on the sofa and watch How I Caught The Killer, is a really useful skill that I never needed before I became a writer.

10. Being a writer is as much fun as I hoped it would be.

Sitting in front of my laptop, listening to my imaginary friends and writing down their adventures, really is a great way to earn a crust. Hanging around with fellow writers, chatting to readers and working with a team of people who love books as much as I do, is the icing on the cake.

Ten years is a very long time, yet in some ways it has passed in the blink of an eye. DCI Warren Jones has plenty more tales to tell, and I can’t wait to share them with the world.

Not read the series? Start with The Last Straw.