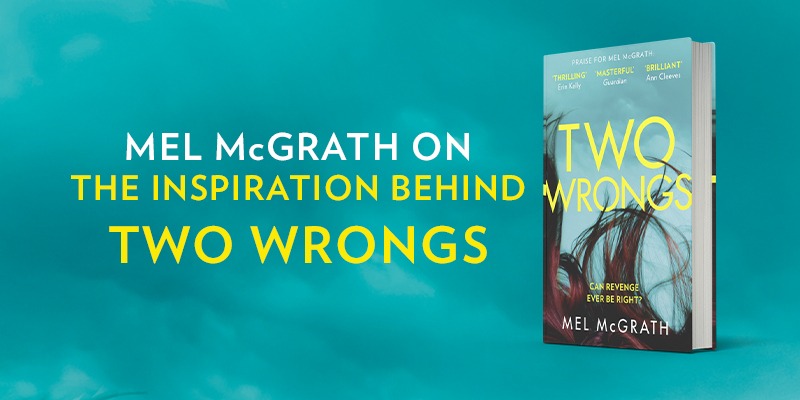 Mel McGrath on the Inspiration Behind Two Wrongs

To celebrate the release of Two Wrongs, the breathless new thriller by Mel McGrath, we asked the author to discuss her inspiration behind the story…

Why I Wrote Two Wrongs

Two Wrongs came about because I’ve wanted to write a campus novel for a long time. I was also keen to tell a #MeToo story.

When I sat down to write the novel, I had a young relative at university and I could see how vulnerable they were. I also drew on my own experiences. Though it was a long time ago now, I have vivid memories of how lost I felt being away from home for the first time, and the sense I had that everyone but me seemed to know the rules. I used my own experiences and those of my young relative to give me a real felt sense of the enormous demands on university mates Satnam, Nevis, Jessica and Tash.

These days young women seem more confident than they were when I was young, especially in the arenas of sex and dating, and around consent. But the pressures are much greater. In my day, there was no social media, no student loan system, no size zero. There were no Instagram influencers with ‘perfect’ lives. We were perhaps more naïve but also freer.

I decided to set Two Wrongs at a fictional university in Bristol in part because the city really is a university town. Perhaps because I live in London, which is so defined by its bridges, I was very drawn to the iconic form of the Clifton Suspension Bridge. The novel begins and ends there. The bridge provides a safe route across a perilous gorge, but it is also a notorious suicide spot. As a bridge between childhood and adulthood, university is supposed to be a safe haven. A place for young people to try on different identities and to learn how to be themselves before launching into the adult world. But what happens if university is the opposite of safe? What if it becomes a place full of danger, littered with traps into which vulnerable young women can all too easily fall?

When I began writing Two Wrongs I was struck by how often women act as bridges, connecting one thing or one person to another. In a way, motherhood is the ultimate bridge. Mothers in particular provide a safe passage for their offspring to develop from helpless babies into independent young adults. One theme in Two Wrongs is the complex and sometimes strained relationship between a mother, Honor, and her teenaged daughter, Nevis. I wanted to explore a question every parent asks themselves: Where’s the line between protecting my child and clipping her wings?

Honor is so hell-bent on revenge for a past wrong when she was around the same age as Nevis that she isn’t able to see what’s right in front of her. It takes an estrangement from Nevis and a shocking incident for Honor to come to understand that her daughter is much more her own person than Honor realised. As I was writing that part of the story, I had in mind a tense period in my own relationship with my mother many decades ago. Sometimes even a close relationship has to venture into choppy waters in order to emerge stronger and with clearer boundaries. Honor has to learn that, however temporarily satisfying revenge might be, it cannot provide the answers she seeks. The only way to do that is to stop living in the past and forge a future with her daughter.

On one level Two Wrongs is a story about power, sex and revenge. It’s about the vulnerability of young women and the pressures we put them under. But at its heart, it’s a story about how a mother and a daughter build a bridge back to one another.

Two Wrongs is out now. You can buy your copy from your local bookshop, bookshop.org, Hive, Waterstones, and Amazon.