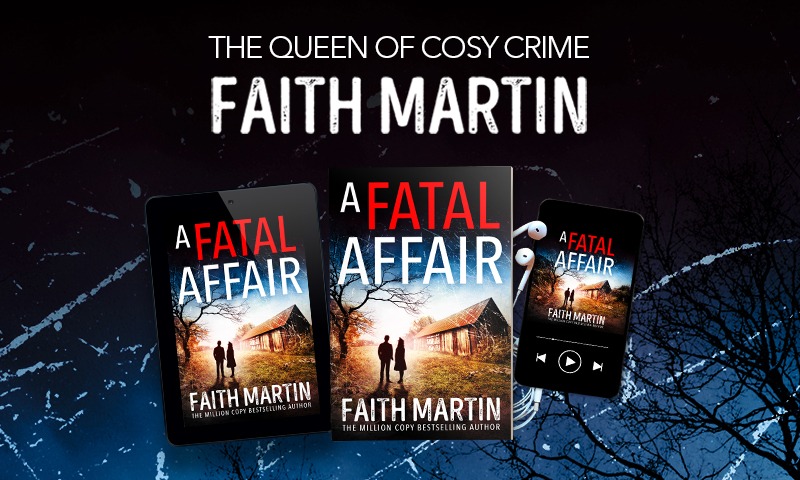 Read an extract from A Fatal Affair

To celebrate the upcoming publication of A Fatal Affair, book 6 in the Ryder and Loveday series, we have an exclusive extract for you to read! Here is your sneak preview of DI Harry Jennings getting ready for a meeting with the Superintendent…

A Fatal Affair – Chapter One

It was a week and four days after the murder of Iris Carmody, and DI Harry Jennings was beginning to feel the strain. His officers had been working on the case non-stop, with the press breathing down their necks every inch of the way. He wasn’t particularly surprised by this, as a beautiful girl dressed as a May Queen and found strangled and bound to a village maypole was many a newspaper editor’s dream.

But it was just one more headache that he didn’t really need.

And he knew that another one was about to walk through his office door at any moment. He sighed heavily and leaned back against his chair, feeling the lack of sleep catching up on him. The trouble was, for such a spectacular crime, the investigation of it was turning out to be frustratingly pedestrian.

For a start, nobody had seen the dead girl on the day of her death. The girl’s parents had no idea why she’d dressed so early and left the family home when she had such a busy day ahead of her. And nobody in the village had heard anything untoward occurring at the village green, either the night before she was found, or early in the morning – not even those sleeping in the cottages surrounding the crime scene.

And whilst there had been gossip and speculation aplenty within the village about the dead girl – and her love life – there was very little confirmatory proof to actually go on. Oh, it quickly became very clear after the PCs had finished interviewing everyone in the small village that everyone and their granny had a lot to say about the dead girl – and not much of it flattering. Or too flattering, depending on who was doing the talking. According to most of the women, she was a flighty girl at best, a man-eater at worst, but nobody could actually point the finger with any conviction at the supposedly long list of her potential victims or lovers. And whilst a fair proportion of the men had liked to hint that they knew Iris rather well, on being pushed for times,

dates and proof, nobody would actually go so far as to admitting to being the girl’s paramour.

Everyone agreed that her ‘official’ boyfriend of the moment had probably been taken for a fool, but unsubstantiated gossip didn’t provide rock-solid motives for murder.

And now, piling tragedy upon tragedy, there had been a second death that was almost certainly connected to the murder of the May Queen. Although this one looked, thankfully, far more straightforward to deal with, and the Inspector had high hopes that it could soon be closed. Especially once his next visitor had been tactfully dealt with.

Here DI Jennings heaved a massive sigh. As he did so, there was a sharp, peremptory rap on his office door, and before he could bid anyone enter, the door was thrust open and a tall, brown-haired man walked in. Dressed in a slightly rumpled, charcoal-grey suit, he was not fat but not particularly lean, and although he was a handsome enough individual, he looked noticeably pale and hollow-eyed. He also looked much older than the fifty-two years that Harry Jennings knew him to be.

As well he might, poor sod, the Inspector thought grimly. Jennings hastily shot to his feet. ‘Superintendent Finch, sir,’ he barked out awkwardly. ‘Er… won’t you sit down?’

A Fatal Affair, the latest instalment in the Ryder and Loveday series by the Queen of Cosy Crime Faith Martin is out 4th March. You can pre-order it from your local bookshop, bookshop.org, Hive, Waterstones, and Amazon.