Grab a few biscuits and a beverage of choice. Settle down and read Parting Shot, the gripping short story by Simon Berthon – author of A Time to Lie. If you’re into your mysteries or spy thrillers, then read on to find out about a retired man named Gwilym.

Though perhaps he should not have allowed it to happen, Gwilym Roberts’s life had long settled into a comforting routine. He felt no call for wild places, no itch to recapture the past, no desire to return to childhood lands of horses, sheep and sweeping views.

Instead he had become accustomed to the square mile surrounding the small block of flats that housed his “eagle’s nest” on its top floor. The irony of naming his eyrie after Adolf Hitler’s redoubt overlooking the Obersalzberg mountains had amused him, even if his possessed just one cramped bedroom, bathroom, and combined kitchen and sitting room. But it did allow a view of the City and the garden square below.

Distant traffic noise drifted up to him as he opened the window and looked down at the square, lined with pretty Georgian terraces. His corner, a wartime bomb-site, had been redeveloped in the 1960s into an ugly plain building, but Gwylim minded nothing of that. While plumbers’ vans attended the grade two listed houses, his flat’s heating and hot water worked unerringly. To be warm was not just delicious but a metaphor for his retirement. He had spent too much time in the cold.

He had now lived here more than a decade – and he was content in a way he could never have imagined. It was partly that he had achieved the biblical three score years and ten – which had once seemed the least likely thing in the world. But there was something more. He had become enough of a recognised sight in his patch for people to acknowledge, even smile at him. He was a loner, but he was never alone.

Inspecting himself in the bathroom mirror, he swept back his grey hair, snipped a few stray tufts from his beard and checked his nose for emerging hairs. He attached old-fashioned hearing aids behind both ears, placed a black homburg on his head and, dark great coat under his arm, took the lift to the ground floor.

Almost immediately he ran into the old lady who lived at number fourteen.

“Good morning,” she said with a smile.

“And to you,” mumbled Gwilym in his Welsh accent, returning the smile. That was as far as it went, and it suited him. People quickly noticed the hearing aids and did not pursue conversation too vigorously.

Today he would give the patisserie his custom. A sweet, French girl called Elise had come to work there.

He shuffled into the shop, his eyes lighting up at the display of pastries in the window.

“Good morning, Gwylim,” said Elise brightly as he limped towards her.

“Bore da!’ echoed Gwilym in his best Welsh. He would have preferred her not to know his name but with Covid they no longer took cash and it was on his card.

‘Your leg is bad today?’

The corner table was free, so he took his seat and retrieved a magazine from his coat. It was his cover for the pleasure he took from watching customers. Which pairs were lovers, who was gay, what country was one from, why did another end up here?

As his coffee and pain au chocolat arrived, a couple in their late forties stopped at the window. They pointed to the cakes, chatting animatedly. He peered down at his magazine, then suddenly looked up. For a split second he caught the woman’s eyes and a cold shiver ran up the back of his spine. There seemed something about her, but he couldn’t think what. The couple quickly moved on.

Back at his flat, he stared out of a window at the City’s towers. The fleeting image of the woman refused to leave him. Perhaps the years really were catching up. The best cure was music. He removed the hearing aids and put on Schumann’s kinderszenen. The sound was every bit as clear as when he had first learnt those pieces as a child. But the notes he knew so well still gave him no peace.

The next Sunday he went to church. He was not religious and had found it through its monthly concerts. He liked the friendly exchanges with the elderly audience, the high Anglican priest who enjoyed a good wave of incense, that no-one minded he did not step up for communion.

On the walk back to the flat, the late, low autumn sun was behind him, lighting every tree and bush in front with a rare brilliance. He limped along and felt a wild rush of happiness; if a thunderbolt struck me down now, he thought, I would die a happy man.

A couple approached on the opposite pavement, squinting into the sun. A familiar gait, the same dark hair swept back.

He moved to a shop window, the sun’s position blinding them and allowing him a long look at the reflection. Yes. Surely it was her. Twenty years may have passed – but he never forgot a face. There was something about the slope of her eyebrows and twitch of her mouth. The couple passed by, eyes to the ground. Once they were out of sight, Gwilym walked home, his strides long and purposeful, any trace of the limp now gone.

In the coming hours, Gwilym thought hard. Now he was not unnerved or fearful; instead his mind remained on that magical moment lit by the sun. He remembered that same sun beating down on brown fields when he was a boy rounding up cattle.

He remembered the pride he had felt as a young man serving his country, even when he did bad things. As an older man, he had followed his conscience – it was not a betrayal of his nation, it was to make a better world. His grateful adopted country allowed him a retirement on his own terms. No guardians, just lessons in basic Welsh for his new persona. After all, wasn’t there something in common between Cossacks and Celts?

By evening, the hours of thinking resolved into a decision. It was as if there had been a sign. Perhaps even from a God. First he wrote. Then he retrieved two bottles of Stoli – nothing grander – from the fridge, his last tin of Beluga caviar, and the two packets of tablets. He would listen not to Shostakovich but to Tchaikovsky. After him, Mussorgsky. If he was still awake.

Three days later, “Mary” and “Joseph” – it was the two watchers’ little joke – sat in Thames House, opposite their head of desk, a younger man without a sense of humour.

‘Our cleaner found him,’ Joseph said. ‘Fortunately it was one of her weeks. She sanitised and phoned 999. They reckon he’d been gone three days. One and a half empty Vodka bottles and a large amount of dextropropoxyphene. He must have stored it away for a rainy day.’

‘So he certainly meant it.’

‘What went wrong?’ asked the head of desk.

‘He always said no minders or watchers. For ten years it was all fine. But then,’ she looked at Joseph, ‘we were given our orders.’

‘Came from the top,’ said the head of desk. ‘After the Salisbury novichok attack, all retired assets to be monitored.’

‘Gwilym didn’t know that, did he?’ said Mary. ‘He might have spotted us and come to another conclusion.’

The head of desk sighed.

‘The cleaner found a note,’ said Mary eventually. ‘We’ve kept it to ourselves.’

She handed it over. The hand writing was precise.

The story ends with me, not you.

May God forgive you.

‘Best to burn that,’ said the head of desk, returning the note. ‘Own goals don’t go down too well in this building.’

Two weeks later, “Mary” sat on a bench in Russell Square. She took a sip of her coffee and watched her contact approach along the path. Pigeons scattered as he sat down beside her and lit a cigarette.

‘What happened, Ana?’ he asked.

‘You think he recognised you?’ he asked.

‘I honestly can’t see how,’ she said, her hand fiddling with the hem of her coat. ‘It was only once. Twenty years ago. One of your predecessors was having a drink with him and I arrived just as he was leaving.’

‘They say he had a photographic memory.’

Mary shrugged her shoulders, but it looked more defensive than she had intended. She steadied herself and handed him the note.

The man produced a brown package from his bag and slid it across the bench towards her. ‘Your lunch.’ She took it without a word, feeling its shape and weight. Ten thousand, in tens and twenties.

‘It is a pity,’ continued the man. ‘We had something more spectacular in mind for him.’

A Time to Lie, the new political action and adventure crime thriller by Simon Berthen, is out tomorrow (10th December). You can buy it from your local independent bookshop, bookshop.org, Hive, Waterstones and Amazon. 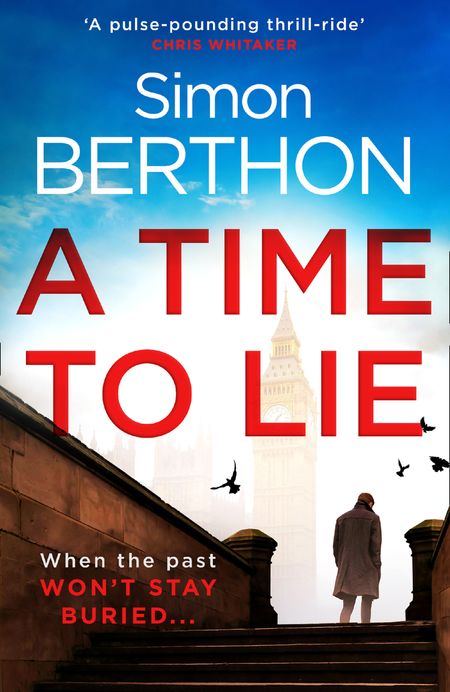 Breaking Out: The incredible true story of Janice Nix

Breaking Out is the story of Janice Nix. Janice Nix lived a life of crime. Groomed to work as a shoplifter in London’s West End, she entered a glamorous underworld of beautiful possessions – and drugs. As she rose to the top of her criminal empire, Janice achieved the… Read More Read an Extract from the Gripping New YA Dystopian The Island

CHAPTER 1 JESSIE Life would be so much easier if I were a psychopath. I’d be charming, manipulative and a pathological liar. I also wouldn’t be wondering what Danny, Honor, Jeffers, Meg and Milo are talking about on the other side of the pool their faces cast in shadow, the… Read More Listen to the Introduction of The Success Code!

Every one of us has the capability to succeed. But what does it mean to be successful? What does success look like for you? And how is it achievable? The Success Code by Amanda Dewinter empowers readers from every walk of life to set their own… Read More