The Depiction Of Christmas by Caroline Flynn

To get you in the Christmas spirit, we have a lovely treat! Caroline Flynn, author of The Winter Berry House, has written a short story. Set in Port Landon, read on to feel of warm and festive…

The Depiction of Christmas: A Port Landon Short Story

If there was one thing the small harborside town of Port Landon went overboard on, it was Christmas. The quaint Main Street was alight with countless strings of vibrant multi-colored bulbs twisted around each lamppost, topped with banners that flapped in the crisp air, giving the illusion that the Santa Claus on it was truly waving to you, merrily shouting, “Merry Christmas from Port Landon!” Wreaths with frosted winter berries and crimson plaid bows adorned every door. Colorfully decorated pine trees filled every front window, looking out over the quiet, snow laden streets.

There was nothing quiet about the interior of the apartment above the town’s beloved bakery, however. The Cakery might have been closed for the night, its storefront as dark as the evening sky, but upstairs, frustration reigned amidst the scent of brown sugar icing and the sight of meticulously placed décor.

“Just one more!” Paige begged, diving toward the cellphone she had propped up and pointed in their direction.

A series of groans and sighs ensued, some muted and thinly veiled—from Cohen, the small town’s veterinarian and Paige’s fiancé—and others loud and dramatic—from Bryce, Cohen’s adolescent son.

“But we’ve already done a million shots!” Bryce explained, rising to his feet from his crouched position on the floor.

The young boy was right, even if he was embellishing the truth. Paige had set the timer on her cellphone camera at least two dozen times, desperate to capture the perfect image for their family’s first Christmas card. So far, she had managed to get only shots that included the side of Bryce’s head, Cohen’s closed eyes, and their dog Jazz’s blurred image as she tried to escape the portrait-taking experience. Norman, Bryce’s black cat, seemed to be the only willing participant, and he hadn’t moved since the quest for picture perfection had begun. It could’ve also been sheer laziness on his part, though.

At this rate, Paige still wouldn’t have the perfect family portrait by Easter, let alone by the time she went to sleep that night.

“One more try,” she reasoned. “We’re so close.” She wasn’t above a little embellishment of her own.

Cohen tugged Bryce into place in front of him by the hem of his shirt. The young boy made a theatric strangled sound, but he relented and resumed his kneeled position.

“Come on, Jazz! If I gotta put up with this torture, so do you!” Bryce clapped his hands, and the brindle boxer obliged, her stubby tail wagging at lightning speed.

“Okay,” Paige breathed out, relieved to have another chance and thankful everyone was on board. “Okay.” She smoothed out her hair, composed herself on the outside despite her frazzled nerves, and clicked the button, resetting the timer to go off in five seconds, taking a series of three consecutive shots when it did. She hoped one of those three images was the one, and though she wasn’t a betting woman, Paige would bet her bakery’s entire inventory of sugar cookies that Cohen and Bryce did, too.

She ran for her spot beside Cohen, the whole family perched in front of the meticulously decorated Christmas tree. On it, ornaments hung from every limb. Some of them were ones that once hung on her artificial tabletop tree in New York, all shiny glass and cloaked in delicate glitter, a reminder of the holidays she sometimes spent alone, too far from family to travel and too swamped by her own single-minded need for success to truly celebrate.

Other ornaments were less fragile but more special, ones Cohen had brought over and hung amidst her own. Some of them were purchased baubles, but most were handmade things Bryce had created for him throughout his childhood, a vibrant array of paper mache and stickers and hand-painted Styrofoam bursting with every color under the rainbow. Two pawprint-shaped ornaments even graced the tree, one with a small picture of Jazz, the other with Norman.

The tree was a conglomerate of their lives before they’d met, and a tangible reminder of the way they had become intertwined, through life, lessons, and love.

Cohen wrapped an arm around Paige’s shoulders just as the rapid-fire clicks of the camera began, followed by bright bursts of the camera’s flash.

At the sound of the second click, the apartment door flew open and Paige’s cousin, Allison, stepped into the room.

“You guys look like you’re being forced to smile by a bunch of Santa’s elves who broke in and detonated a Christmas bomb,” she teased, staring at the abundance of red and green décor around her. “Which promptly exploded,” she added. Her husband, Christopher, appeared a moment later, mimicking their grimace-like smiles.

The room erupted in a fit of laughter. Bryce buckled over, draped across Jazz, who was practically vibrating with excitement at the sight of the newcomers. Cohen’s deep laugh echoed, loud and sincere, off the sage-colored walls. Norman watched the whole ordeal with muted disinterest.

Paige laughed, too, despite bordering on a holly jolly breakdown. Her festive fervor was quickly gave way to holiday horror. She was never going to get this Christmas card photograph right!

As Jazz broke away from the familial cluster, everyone followed suit. A sigh escaped Paige’s mouth, but there was a flicker of a grin she directed at Allison. Not even immense frustration could cloud her love for her cousin.

“Family photo fun, I take it?” Allison plucked the camera from the chair it rested on.

“In theory,” Paige replied with a nod. “It hasn’t worked out so far.”

Allison’s auburn hair was loose, and the glittering Christmas tree lights seemed to vaguely reflect off the shiny strands as she pressed buttons on the cellphone and swiped the screen, sifting through the gazillion images that had been captured.

“What are you talking about? These are awesome.” Her cousin chuckled at one she found particularly comical, her gaze never leaving the screen.

“Someone’s always either looking away, has their eyes closed, or is trying to make a mad dash for the nearest escape route.” Paige blew out another breath. “I’m beginning to think it’s futile.”

“Futile, schmootile. That’s your problem, cousin dearest. You always think things have to be exactly as you envision them in order to be perfect.”

Having grown up with Allison and being best friends for as long as she could remember, Paige wasn’t affronted. She was a bit confused, though. “What do you mean?”

“Paige, Paige, Paige.” Allison shook her head, as though she pitied her cousin not being able to see what was so clearly in front of her nose. “Picture perfect portraits with straight posture and elaborately timed smiles with blindingly white teeth are for the folks who only care about what it all looks like, not what it truly is.”

Paige stared at her, waiting for her to continue.

“You guys—the Henleys and the Becketts—are more than that. What you and Cohen have is real. The little family you’ve become is real. And the love that binds it all together is more real than any posed portrait could ever compete with. There’s nothing posed and pretend about the five of you, but that doesn’t make it any less perfect.” Allison swiped the cellphone screen and held it out to Paige.

In her hands, Paige witnessed the final picture captured on the camera, taken the moment Allison and Christopher arrived. The photo was candid. Cohen’s head was back, laughing unabashedly. Bryce’s eyes sparkled and his smile was caught mid laugh as he hugged Jazz to his chest. The dog’s tail was only a blur as she stood there, wagging it like a supersonic propeller. Norman, always the unamused one of the group, was turned toward Bryce and Jazz, staring at them as though they were about to sprout three heads each. And Paige…

She was smiling, her own happiness radiating outwards as she stared at the loving family she was surrounded by.

“Looks like we’ve got a photo to include in our Christmas cards,” Paige announced.

Her cousin reached out and hugged her tight. “And you’d better believe it’ll be front row and center on my fridge.”

Paige loved the idea of that, mostly because the photo was already front and center for her, too…in her heart.

Travel to Port Landon this Christmas with The Winter Berry House. Now available for only 99p! Download here. 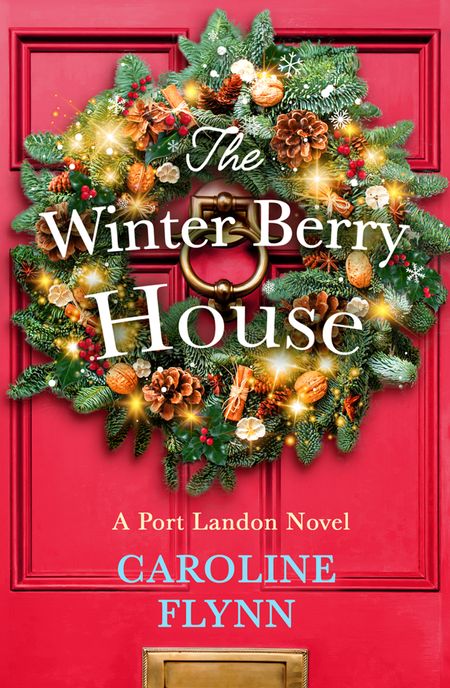