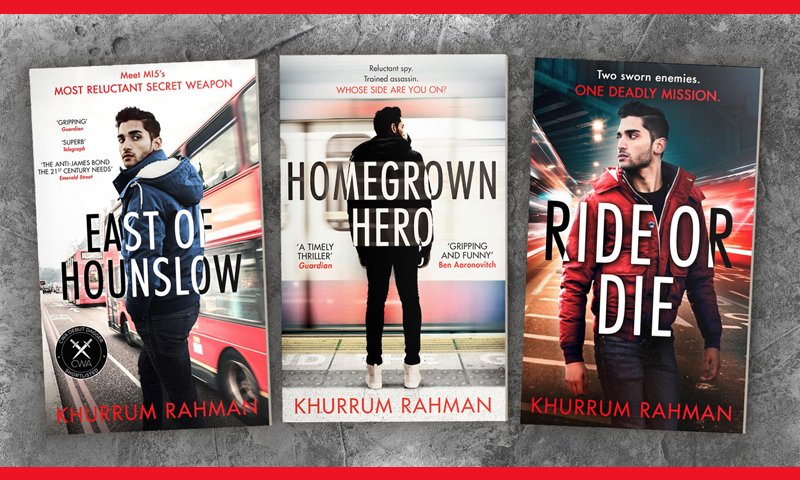 The man behind Jay Qasim: How Khurrum Rahman became an author

Khurrum Rahman, author of the incredible Jay Qasim series, shares his journey to becoming a writer.

I never had any ambitions of becoming an author. Never did it once cross my mind that I would be published. It wasn’t a lack of ambition or confidence, it just wasn’t on my radar. Authors are supposed to be worldly, well spoken, able to hold court on various subjects with a firm grasp of the English language. I’m none of those things. I achieved an F grade for GCSE English and English Lit. Maybe achieved isn’t the right word.

No, I couldn’t possibly be an author.

My failure in the subject never stopped me from writing, I’ve always had a love for stories, and I’d spend hours writing as a means of escape from the real world and getting lost in my imagination. It was for my own entertainment and I enjoyed the process of spilling my fantasies onto a blank page. If I felt that a piece of work was near decent then I’d hesitantly show it to my wife, maybe a couple of friends and they’d come back to me with a glowing report.

I knew it was biased and it felt like patting a toddler on the head and sticking up their artwork on the fridge before it ultimately makes its way into the recycling bin. In the back of my mind, there was doubt whether my stories were actually any good, but who cares – I was in the zone and it didn’t deter me. I was never under any illusion that this line of work, this hobby, was going anywhere.

I didn’t attend creative writing courses or write letters to literary agents asking to take a chance on me. Writing was just something to fill my time with and it gave me a sense of accomplishment. That was enough for me.

I wasn’t expecting what happened over the next twelve months. Freak luck. The stars aligned just so.

At the time I was reading a lot of books by Stephen Leather, an author whose work I hugely admire. I was a fan. And like any fan would, I started to follow him on social media, not knowing how that simple action would change my life.

One day, out of the blue, Stephen sent me a direct message. That in itself was bizarre. He wrote that he was working on his next book which involved a Muslim character and he wanted to know if I would read over his first draft and advise if this character rang true. He chose me, possibly, because I was one of a few Muslims that were following him. It didn’t matter, I was buzzing with excitement. Stephen Leather! This best-selling author whose books I’ve devoured, was asking me, me, for advice.

Casually, I replied: Sure, I’ll do it.

Stephen emailed across the first draft and I spent a week going through it whilst making notes upon notes. I typed it all up, read over the notes a hundred times and then sent it back to him. A day or so later he replied back telling me how helpful it was.

And that should have been that. I had contributed to a piece of work that would soon be published. Soon be available in the bookshops. The feeling was incredible but fleeting. Somewhere knocking around in my head was a thought. Maybe, just maybe Stephen Leather could return the favour.

I got back in touch with him. I told him that I was somewhat of an amateur writer and would love to know what he thought about my work. His reply was no nonsense but fair, telling me in no certain terms that everyone seems to think they have it in them to write a book, and in almost every case, they’re deluded. I could feel the incredulous shake of the head and the eye roll in his reply. But as his back had been scratched, he kindly agreed to look at my work.

It made me nervous. I almost bottled it. Before I could talk myself out of it, I attached my one and only manuscript and emailed it across to him. Then I waited for the inevitable. The equivalent of the F grade that I received in GCSE English.

The reply from Stephen came a week later.

I stared at the screen, reading and re-reading his words, laughing to myself like a mad man. He told me that he loved it. That my characters felt real and my writing style was unique. He said that I had talent.

If that wasn’t enough to send me in a spin, Stephen informed me that he’d now passed on my work, my shaky first manuscript, to his agent, who also loved it, and wanted to set up a meeting with me.

I was expecting a critique, possibly some guidance from Stephen at best. I was not expecting this at all.

A couple of weeks later, I was sitting in the agent’s office feeling ridiculously out of place. I was offered a drink which I ended up spilling on my shoes. I was so nervous. The agent told me that this isn’t how they do things normally, but that he saw something in my work. I was quickly signed to the agency and set to task.

Not knowing what I was doing, I went with it, thinking that it was only a matter of time before I was found out. Within the year, I handed my agent the first draft of East of Hounslow and then I waited for the inevitable – the rejection, to be told what I already knew. But it didn’t come. This path that I had unintentionally set foot on was still ahead of me.

The manuscript started to do the rounds from publisher to publisher. It wasn’t long before I received a phone from my agent. The phone call. HQ were offering me a book deal.

It never felt real until that moment.

I remember a meeting with my new publisher, it was on the 16th floor of The News Building. I was sat in a room. In front of me was a glass of water which I didn’t dare touch in fear of spilling it. Around the table was my agent, editor, publicist, marketing and the executive publisher. Every eye was on me as they laid out the plan to promote my book. I honestly don’t think I heard a word of what they were saying, because for the first time, in my hand, was the first edition of East of Hounslow.

I couldn’t make sense of it and I couldn’t take my eyes off it.

Now, I’m just about to publish book three in paperback. I still can’t believe the sequence of events that have led me here. It still remains a wild source of utter wonder to see my novels in bookshops.

Somewhere in the back of my mind, I’m still waiting to be found out.