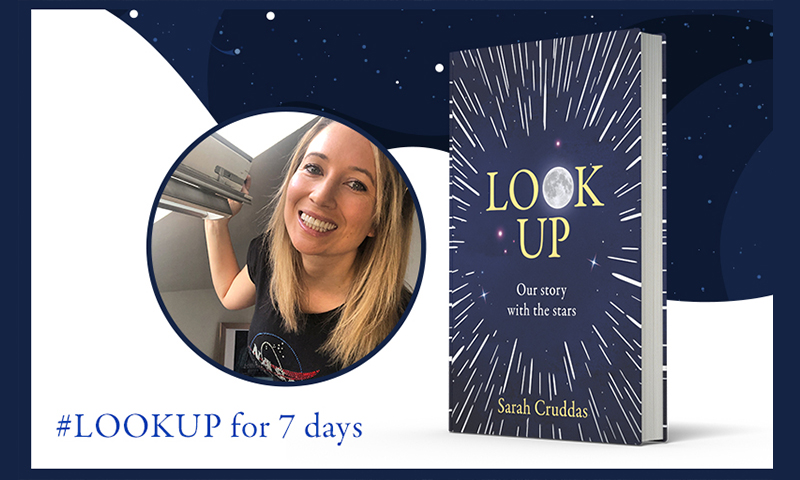 Look Up with Sarah Cruddas

One thing we can all do, no matter where we are in the world, is look up and appreciate the night sky. You don’t even need to go outside to do it, you can just look out of the window. Of course, this is all dependant on the weather, but clear nights offer a view into the universe that we are a part of and an opportunity to explore the possibilities of space.

Look Up: Our story with the stars is not a guide to the night sky. Instead, I hope that by reading it all of you will be filled with the same wonder and hope that I have when I look up at the stars, be encouraged to step away from smart phones, and get excited about space.

These are my seven favourite things to look up at without needing any specialist equipment:

One of my first memories is of looking up at the Moon and, to this day, looking at the Moon fills me with wonder and awe. It blows my mind to think that 12 humans have walked on its surface, and that they have been able to look at our Earth in the same way that we look up at the Moon.

The Moon has been our companion in the night sky for our entire existence, so looking up at the Moon is something we share in common with our ancestors. The difference between us and our ancestors, though, is that we can view the Moon with the knowledge that it is not a distant world, but a place that humans have been. And although we have not been back since December 1972, the Moon represents our future. It is a place people will once again explore in the next 5-10 years and, this time, missions will last longer than a few days. Looking up at the Moon shows us all how much we have achieved. For me, looking at the Moon fills me with hope and excitement about the possibilities that will come from exploring space in the near future.

The planet Venus is an incredible sight. To see it, all you need to do is look to the west after sunset. It is the second brightest object in the night sky to the Moon. Learning about Venus is one of the things that fuelled my interest in space as a child. I remember learning about the planets at school, and Venus fascinated me. I like to think of the planet as the Earth’s evil twin. Similar in size to our own Earth, it has this choking thick atmosphere that crushes spacecraft which land on the surface. While it is unlikely humans will visit the planet any time soon, it is still a fascinating world, and a place that scientists had assumed was inhospitable, but may actually contain simple microbial life within its atmosphere. We just don’t know.

If you are prepared to get up early – and by early, I mean 3am – Mars is something you can see low on the horizon in an east-south-easterly direction. Mars is one of the most exciting places for human space exploration. After the Moon, it is our next closest destination in the solar system. Although it might not seem it, as you couldn’t survive there without the protection of a spacesuit or a spacecraft, it is the second most hospitable of the inner rocky planets (with Earth being the first). The planet is a place that humans will visit later this century and it is highly probable that the first person to walk on Mars is in school right now. Our generation of Mars explorers walk among us.

Another difference between when we look up in the night sky and when our ancestors looked up, is that we don’t just see the Moon, the stars and the planets – occasionally we can also see human-made stars. Satellites, which orbit above us, can sometimes be seen in the night sky – their solar panels reflecting light from the Sun. One of the most fascinating sights are the SpaceX starlink satellites, which can sometimes be seen crossing our night sky, one after another. The goal of these satellites is to provide internet access to remote locations on Earth, including in the developing world. They can be a little tricky to spot and the times change every day, but I post on my twitter when the best chances of seeing them are @sarahcruddas

If you are prepared to get up early, another great thing to look up at are the planets Jupiter and Saturn. If you look to the south east before dawn, you can see the two gas giants as bright points of lights. The planet Jupiter is the brighter of the two. I love looking at the planets in the night sky, as these are whole other worlds in our solar system that we can all look up at. One helpful trick to tell if what you are looking at is a star or a planet is that stars twinkle, whereas planets don’t. The reason? Stars are much further away, and so their single point of light gets distorted by our atmosphere.

Instead of pointing out the constellations, what I prefer to do is fuel people with wonder when they look up at the stars. One of my favourite things to think about when looking up is that for pretty much every star you can see in the night sky, there is at least one planet orbiting around it. In fact, there are likely more planets than stars in our universe. So next time you look up, think about all of the strange and wonderful worlds that could exist in our universe. It is not an impossible notion to think that at the same time you are looking up, there could be someone, or something, somewhere in the universe looking back at you.

My favourite thing to see in the night sky is, without a doubt, the International Space Station (ISS). You can see it appearing like a bright light crossing the sky. On-board at the moment are 3 astronauts who live and work in space, conducting science to benefit all of us on Earth. The space station isn’t even that far away – it is roughly the same distance that London is from Newcastle – 240miles. The times you can see it vary, but I always tweet when the space station passes @sarahcruddas, and you can also use this great NASA resource spotthestation.nasa.gov

Look Up: Our story with the stars is out September 2020. You can pre-order your copy here.